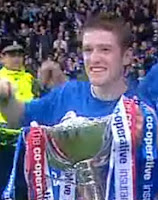 The competition welcomed clubs from outside the Scottish League in 2010/11 when two clubs from the Highland League entered. The scope for additional entrants has continued to evolve, with leading “non-league” clubs, Premiership Under-20 sides and representatives from Northern Ireland, Wales, the Republic of Ireland and England’s National League.

Scottish League Spring Cup:
Arranged to bulk-out the season for the 14 team Scottish First and Second Division teams following the creation of the Premier Division in 1975. It proved unpopular with fans and clubs alike and lasted just one season, but may be considered a predecessor to the Challenge Cup...