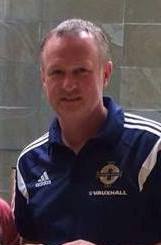 Biography:
31 times capped as a player, Michael O'Neill's managerial career began with Brechin City. He then spent three successful seasons in charge of Shamrock Rovers, where he was latterly assisted for a spell by Jim Magilton. As well as two titles and a Setanta Cup, Rovers also enjoyed an unprecedented run in the Europa League under O'Neill's charge.

In December 2011 it was announced that O'Neill had beaten off competition from Magilton and Iain Dowie for the appointment as Northern Ireland manager. He officially took the position from the 1st February 2012, with his first game against Norway at Windsor Park at the end of the month. Former Scotland international Billy McKinlay was appointed as his assistant, with Tommy Wright as goalkeeping coach. Wright left the set-up when appointed St Johnstone manager in June 2013 and was replaced by Maik Taylor. McKinley left in September 2014 when appointed as Watford boss with Jim Magilton taking on the role of assistant manager and Stephen Robinson also joining the coaching set-up, both on an interim basis. Jimmy Nicholl was then appointed as permanent assistant manager in March 2015, with Robinson retaining his coaching role.