Northern Ireland's captain for close to a decade, Aaron Hughes' leadership got off to a disastrous start with a 5-0 defeat by Spain, but thereafter he led the team to a number of historic results...

On 27 June 2007 Aaron Hughes teamed up with his former international boss, Lawrie Sanchez, at Fulham.

In August 2011 became the first Northern Ireland player to make 400 appearances in the English Premier League. When he played his 455th and final Premier League match in January 2014 he had never been sent-off, a record only bettered by Ryan Giggs.

Hughes announced that he would retire from international football at the end of the Euro 2012 qualifying campaign. However, he reversed that decision in February 2012.

He has featured in every defensive role for Northern Ireland and is now the second most capped player of all time, and the most capped outfield player.

In 2015 Hughes signed for A-League side Melbourne City. In 2016 he joined Indian Super League side Kerala Blasters as their marquee player and helped them to the championship final where they lost out to Atletico de Kolkata on penalties.

Pictures by Roy Cathcart and Chopper1 from the OWC forum. 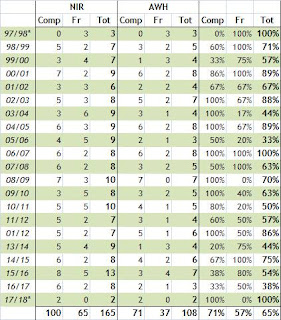