“The star player of those days was wing maestro Stanley Matthews. Bud kept him quiet every time they met.” (Hatters Heritage Website)
Thomas 'Bud' Aherne was born in Limerick on January 26th 1919. He grew up in the Thomondgate area of Limerick city, where he took to playing sports as a youngster. At first, hurling was his game-he played for the famous Treaty Sarsfield club and he did well enough to be selected for the Limerick senior team. But good as he was with a hurl in his hands, Bud was even better with a ball at his feet, and he decided to try for a career in soccer. That decision paid off, and by the time he was eighteen Bud was playing for Limerick FC in the League of Ireland.

In Bud's first season with Limerick FC, they reached the Munster Senior Cup Final. In that Final, which was against Cork, Bud saved the day for Limerick by scoring the goal that earned them a 2-2 draw, giving them another opportunity to win the Cup when the Final was replayed. And they took their chance and scoring two goals they won the match 2-0. Limerick were the Munster Senior Cup Champions of 1937.

After that brilliant showing in his debut season, Bud became a very popular player with the supporters at Limerick's Markets Field ground. He originally played at outside-right for Limerick, then switched to left full-back for the 1938/39 season, and he continued to get forward and join the attack from his new position in the defence. As the Limerick Leader newspaper said, “Bud Aherne was barrel chested, tigerish in the tackle, and well known for his forays upfield-when the crowd's battle cry “Come on, Budda” would echo for him through Markets Field.” 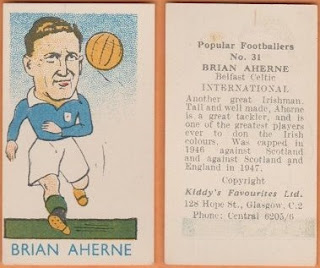 Following his excellent first season at left-back, that became Bud's main position in the Limerick side, but he was also an exceptionally versatile player. He was two-footed and could play any position in defence, midfield or attack. No matter where he was selected, he was a top-notch player for Limerick, and over the years his dynamic play helped make them one of the better sides in the League of Ireland. They reached the FAI Cup semi-final for the first time in 1943. They then finished runners-up in the League, in 1944 and 1945. By that time Bud had earned a reputation as one of the best players in Ireland and the big clubs, north and south, wanted him.

In early 1946, Bud left Limerick to join the legendary Belfast Celtic, and he had a grand old time of it with them. Celtic were acclaimed for their exciting, winning football and Bud's all-action style of play was a perfect addition to such a thrillingly successful side. In '46/'47, his first full season in Belfast, Celtic won the league and the Irish Cup, thanks in part to some stellar performances from Bud in the left midfield position. Next season, Bud earned three more medals when Celtic won the City Cup, the Gold Cup and the Irish League. He ended up winning six major trophies in three years with Celtic.

Bud had won all there was to win with Celtic and he had proved himself again and again at the top level of Irish football. He turned thirty towards the end of the 1948/49 season, an age when players sometimes start to decline, but Bud was a long way from finished. He still had the speed, skill and determination that made him such a force throughout his career. This, combined with the guile and cunning that experience had added to his game meant that he was probably a better player at thirty than he had been at twenty.

In March 1949, Bud was signed by the English Division Two club, Luton Town. He went straight into the Luton team for their match against Tottenham Hotspur at White Hart Lane on March 19th 1949. That was a tough debut to make, an away game to a superb Spurs team in front of a crowd of 41,839, but Bud more than held his own. He played a good game at left-back, and he kept his place in the team thereafter.
By the start of the 1949/50 season, Bud was the first choice left-back for Luton, and an automatic selection in the side from then on. As he had with Limerick and Celtic, Bud played in various different positions for Luton, and he was regularly selected at right-back and centre-back and in midfield or attack. Wherever he was selected he did well, and in time he became an essential player for Luton-and a favourite of the supporters at their Kenilworth Road ground.

With Bud in the team Luton steadily improved over the next few years, and they went on to have their best seasons ever. In 1951/52, Luton finished in the top ten of Division Two, which they hadn't done since before the War. They also made their best ever showing in the FA Cup that season by getting all the way to the sixth round. Bud played a big part in that Cup run when he put on a defensive masterclass in Luton's 1-0 victory over Charlton Athletic on January 12th, 1952. The Bedfordshire Pictorial reported “That Luton opened their campaign in this year's FA Cup with a victory had much to do with Bud Aherne. He was watertight as ever and, though the right winger, Hurst, who is regarded as one of Charlton 's trump cards, tried all manner of things to get clear of him, Bud, stood firm all game long and made sure of his team's win”

Luton then beat Brentford and Swindon to reach their first ever FA Cup quarter final, in which they put on a brave showing against Division One Arsenal, who snuck through by one goal. As well as their good show in the Cup that season, Luton finished eighth in the league. This was the best position they'd reached since the War. They went on to attain top ten finishes again in '53 and ‘54. And then came the 1954/55 season, when Luton finished in the runner up position and earned promotion to Division One for the first time in the club's history.

Through all that eventful period of time, Bud was an incredibly reliable player for Luton. In his first six seasons with the club, he played 220 league games, including 88 in a row between October 1953 and November 1955. That great run of matches could have been ended much earlier, when Bud took a fierce bang to the head in a match against Leicester in February 1954, causing an injury that seemed certain to put him out of action. But the Luton News reported “the gash on the head that Bud Aherne received did not cause him any inconvenience”. Bud carried on as if nothing had happened, he was in the Luton side for their next match and his run of consecutive appearances went on and on. He was an “ever-present” for Luton in their promotion season, and his great contribution to that achievement was reported in an article in the Liverpool Echo, it said “Lively Luton bring on the Brogue, as Thomas Aherne, popularly known to all in Luton as Bud, played in every match of the 1954/55 season and had much to do with Town's success in gaining promotion”.

Having done his bit to get Luton promoted, Bud remained a crucial player for them in Division One during the 1955/56 season. On August 20th 1955, Luton played their first Division One match against Charlton. They made an encouraging start, but didn't get anywhere in it for the first half an hour. Then, in the 31st minute, Bud made a galloping run up the left wing, using his strength and expert control to take the ball into space on the left side of the Charlton area, from where he played a perfect cross into the box that set up Luton’s striker to score the team's first Division One goal. That wasn't the last bit of good play from Bud and Luton in the match, which ended 2-2: a decent enough result from a team in their the top flight debut. As the Sunday Mirror reported “Luton’s confident play was encapsulated by the fine performance of full-back Bud Aherne, who came upfield to swing the ball across for Turner to score”. From then on, all through the season, Bud's tough resilient defending and speedy powerful attacking was a major factor in Luton's impressive performance in finishing 10th in their first season in Division One. 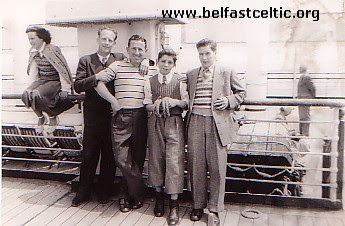 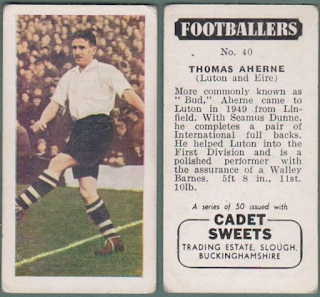 Luton made a good start to the 1956/57 season. With Bud in top form for the team, Luton won five and drew one of their first nine matches and it seemed that all was well for club and player. But in their tenth match of the season, against Tottenham on September 22nd, 1956, everything went wrong. Luton were beaten 5-0, and afterwards the Luton manager made several changes to the team. For the first time Bud was dropped from the Luton team, and he missed their next eight games. That turned out to be a mistake for Luton, because they were much worse off without Bud. They didn't win a match for more than two months, until Bud returned with a peerless defensive performance in Luton's 3-0 win over Cardiff City on November 24th 1956. He was back in the team and he stayed there, playing Luton's next six games, until a thigh injury against Man City on December 29th put him out of the team until the new year.

Bud missed Luton's next three matches, He was 38 by then, with twenty years of hard running and countless cuts, bangs and knocks to overcome every time he stepped on the pitch. But he didn't let that stop him: he worked hard and fought his way back to match fitness for Luton's match at Leeds on February 9th 1957. On that day, he gave a rock-solid comeback performance and his unyielding defending secured victory for his team. He was again in top form the following week in Luton's 4-1 win over Newcastle, and at that stage it looked like he would be a fixture in the team for the rest of the season.

Then came the away game against West Brom on February 23rd 1957. On a bitterly cold winter day, with ice and snow covering the pitch, Bud was haring all over the place, forward and back, from one wing to the other, trying his best to help Luton stay in the game until, as the Sunday Mirror reported: “on a treacherous and tricky surface at the hawthorns, Luton were handicapped by the loss of left-back Bud Aherne when snow clogged between his studs, robbed him of a foothold and he went down, twisting in agony”.

Bud had a fractured ankle; he came off the field and that was it. He didn't play for the rest of the season. In fact, that was his last league game for Luton and his last game in professional football.
Other articles by Gavan Bergin