By jcd February 06, 2021
Article kindly provided by Gavan Bergin.
See the bottom of the post for links to more of Gavan's work. 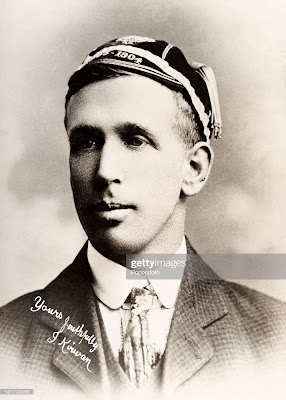 Jack Kirwan was born in Dunlavin Co Wicklow in 1872. He grew up to be a fine Gaelic footballer and won the All-Ireland Championship with Dublin in 1894. He also played soccer and was good enough to earn his living as a professional player in England. He joined Southport Central in early 1898 and while playing for them in the Lancashire League he was scouted by several Football League clubs before being signed up by Everton in July 1898.
Jack played the outside-left position and he possessed all the attributes needed to be a top notch winger. He had the speed of a cheetah, was clever on the ball and made plenty of goals. He demonstrated his ability from day one with Everton, scoring eight goals in 24 games for the reserve team before making his first-team debut against Preston in September 1898. By the end of the season, he’d scored six in 26 first-team matches- an undeniably impressive performance in his first season at the highest level. It wasn’t enough to keep Jack at Everton and by the start of the next season he was playing for Tottenham Hotspur, who signed him in June 1899.

At that time Tottenham was an unremarkable club that had been stranded in lower league football throughout its existence. Since its formation in 1882 by a group of local cricketers who held their first club meetings under a gaslight on Tottenham High Road, the club had done little to suggest that it would ever rise above its lowly status. The first hint that Spurs might one day amount to something was given when they moved into their fine new home ground, White Hart Lane, in 1898.

Jack’s transfer to Spurs was a backward step in his career, from centre stage with Everton in the First Division to obscurity with Tottenham, but Jack obviously wasn’t bothered by that and he played his heart out for the Spurs. In his very first game for Tottenham, he scored two blazing goals to get his team a win at Millwall in the opening league match of the 1899/1900 season. And that was just for starters, he played brilliantly throughout the season and scored 17 goals in 39 games to help Spurs win the Southern League for the first time.

They were in very good shape as they began the 1900/01 season, but Spurs were still a small-time club and utterly insignificant in the wider world of English football. Making a decent run in the FA Cup was Tottenham's only opportunity to play against the best teams in the country, but they had no history of getting far in the Cup, and any slight hopes they had for doing any better this time must have seemed forlorn when they drew mighty Preston North End in the First Round. Preston were considered a certainty to win the game, but Spurs just managed to scrape a draw when the teams met for the first time, then in the replay they upset the odds even more when they won 4-2 to take the game, and the tie. In the next round Spurs played the reigning Cup champions, Bury, and with confidence high they dealt with them competently and cleanly, winning 2-0. Amazingly, Tottenham Hotspur had reached the FA Cup quarter-final.
Spurs' quarter-final match put them up against Reading. if Tottenham anticipated an easy match they got a nasty surprise. Reading scored the first goal then defended successfully until well past the eightieth minute of the match. Spurs were looking down and out. Perhaps their day was done, their run was over, but then with time almost gone Jack made a run upfield, charging like the Light Brigade, forward and further forward again, then he fired the perfect shot at the perfect time to score the perfect goal, the goal that saved the day, and saved the game, for the Spurs.

The replay against Reading was much more straightforward. Tottenham won 3-0, then in the semi-final they Spurs beat West Brom 4-0, and so Spurs, the little Southern League team, found themselves in the final of the oldest and most famous football competition in the world. 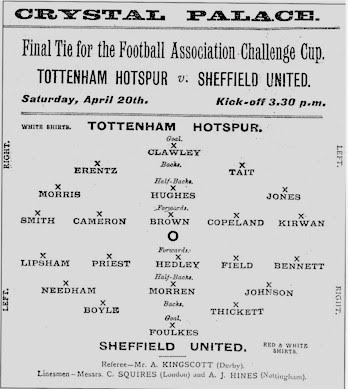 The 1901 FA Cup Final was played at the Crystal Palace Exhibition Ground in London, where a crowd of 110,820 spectators watched Tottenham line up against the mighty Sheffield United, who had won the League in 1898 and the Cup in 1899. They were a proper club enjoying their best years, on their way to the Final, and still favourites to win the match.
When the game began, Sheffield took the early initiative, and when they scored in the eleventh minute it seemed likely that they would prove the bookies' predictions correct. But Spurs showed their mettle again by fighting their way back into the game with some good attacking moves, while holding it together at the back to prevent any further breach. In the 23rd minute a chance was made and taken and Spurs made it 1-1. The scoreline stayed even until the sixth minute of the second half, and then Jack made his mark on the match. breaking free of his marker he made a sprint, outpacing defenders all the way he went forward with his head held high, searching for any chink of space. Then he found the angle he wanted and played the perfect pass, timed to arrive precisely in the stride of the Tottenham forward who put the ball away into the net for the goal that took the lead. Heaven it was, but for only a short time, as a minute later Sheffield made it 2-2 and that was how it stayed.

Another replay a week later, but a very different type of match. Tottenham had their blood up and they took a 3-1 victory from Sheffield. Spurs had won the FA Cup.

They were the first London club, and also the first non-league club, to win it. That Spurs team was also remarkable for the fact that it contained only three Englishmen in it. The rest of the players were Scots, Welsh and, of course, our one fine Irishman-Jack Kirwan. He played in all eight matches in the Cup as well as 28 league games for Spurs that season.
Jack played 268 matches and scored 66 goals in his five seasons with Spurs, and his contribution to those first days of glory in the early history of Tottenham have gained recognition for him as a genuine club legend and he Cup win of 1901 was a sure factor in helping Spurs’ growth into a football club with a unique character, one of the most famous and celebrated clubs in the world, and one that is renowned for playing the beautiful game beautifully.
Spurs reached the highest of heights in 1961, when they won the double of the FA Cup and the First Division, with arguably the most stylish and revered team ever to grace English football-and in their great and dashing deeds those players of '61 were following in the steps of Jack Kirwan and the pioneers of 1901.

When he left Tottenham in 1905, Jack moved to Chelsea and scored 16 goals in 76 games for the Blues over three seasons. He played a season for Clyde FC in Scotland before he retired in 1909-having played close to 400 matches in English club football.

During that time, Jack also had an international career. His first game for the Irish team was against Wales on the 24th of February 1900, and it made him the first Tottenham player to play for Ireland. He was a regular starter by the time of Ireland's British Championship match against Scotland in Glasgow on March 21st 1903. Ireland needed victory to have any chance of success in the tournament. The match kicked off in a strong wind, and the fast and frantic pattern of play matched the weather, which the Irish Times described as “boisterous”. Scotland were on top, as expected, early on fashioning two good chances. Ireland livened up and Jack came to the fore, “attacking keenly with some grand work on the left wing”, but Scotland retook the initiative and dominated until midway through the half, when an Irish defender won the ball and showed enough composure to play it well to Jack who “picked it up and once more got away on the left wing”, he advanced to play the ball up into the Scottish area, where it bounced around before falling to the Irish forward, Connor, who bundled it in to give Ireland the lead. Scotland reacted by playing hard in attack and peppering the Irish goalkeeper with shots through the rest of the first half, but Ireland managed to hold their lead.

In the early stages of the second half, Scotland had the wind at their backs and put remorseless pressure on Ireland and the play went one way and then the other before settling back into a pattern of Scottish dominance. It seemed as if a Scotland equaliser was inevitable, but Jack began to turn on his skills again, earning loud cheers from the crowd for one sweetly zigzagging run and pass that put a striker free and clear to shoot the ball in, but offside was called. Then in the very last minutes of the game, Jack played the ball out to the wing then dashed forward, through the middle this time, showing perfect timing to get into the penalty area at the exact moment the ball was crossed in, then meet it dead on to knock it neatly into the net from close range for his first international goal. Ireland won the game 2-0 and they earned a share of first place in the British Championship, the best they'd ever done. Jack played seventeen matches for Ireland, earning his last international cap in 1909.

After he retired from playing, Jack embarked on a career in football management and he was appointed as the boss of Ajax Amsterdam in September 1910. In his first season he guided Ajax to victory in the Dutch second division and promotion to the top-flight for the first time in their history. Jack stayed with Ajax for another three seasons until the outbreak of the Great War.
Following the war, he returned to Ireland and spent some time coaching at Bohemians before he got another management job in 1923, at the Italian club Livorno with whom he spent two seasons. He retired totally from football in 1925 and lived quietly at his home in London not far from White Hart Lane, where the Tottenham fans had long revered him as the survivor of the 1901 Spurs team. Jack died in 1959-a grand old hero of football's early times, who excelled for Spurs and for Ireland. Jack Kirwan played the game in the right way, he played with determination and skill. He should be remembered, now and forever.
Other articles by Gavan Bergin