A member of the St Mary's Grammar side that won the Belfast Senior Schools Cup in 2011.

A regular through Northern Ireland's youth teams, he made his Under-21 debut against FYR Macedonia in May 2012.

Joined the Liverpool's senior squad for their summer 2012 tour of the USA and made his debut in a friendly against Roma.

Received his first senior international call-up for August 2012 friendly against Finland but had to withdraw due to a hip injury. 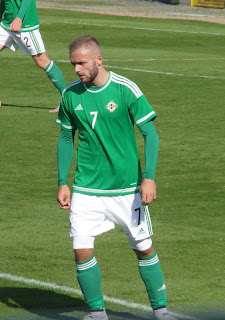 In January 2014 he joined Championship side Barnsley on an initial one month loan and made an impressive senior debut in a 2-0 win over Blackpool. The deal was called into question when he suffered a hamstring injury, but on his recovery the move was extended until the end of the season.

Another loan deal saw McLaughlin join Aberdeen early in the 2015/16 season. He enjoyed very few firstteam minutes at Pittodrie and returned to Liverpool mid-season as they suffered an injury crisis.

For a period McLaughlin declined to be included in any international squads, leading to speculation that he was about to switch allegiances to the Republic of Ireland. However, on selection for the Northern Ireland squad that toured South America in the summer of 2014 he revealed that he had simply been trying to make his mark at club level. On making his debut as a substitute in a 1-0 defeat by Uruguay he became the first current Liverpool player to earn a senior Northern Ireland cap since Elisha Scott in 1934. He was also joined on the pitch by Conor, making them the 21st brothers to earn full international recognition from the Irish FA.

McLaughlin's injury hampered five years at Liverpool ended when released in the summer of 2016 without making a senior competitive appearance. He then joined Oldham Athletic, managed by Stephen Robinson who had coached him at international level.