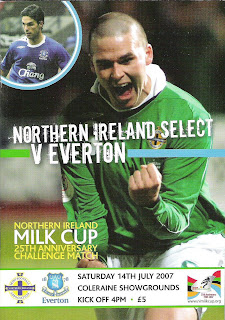 So, half an Everton team beat a Northern Ireland side featuring four regular squad players in a match where neither set of players were at full fitness levels. What did anyone learn from this? For David Moyes, it was a chance to assess how his young players cope playing with seasoned first teamers and to further his players’ progress towards match fitness; but those who turned out for the Northern Ireland ‘select’ could easily have done that with the clubs that employ them. For Nigel Worthington, cleverly disguised as Roy Millar, he will have picked up very little from watching this drab 90 minutes that he couldn’t have found out from you or me.

Irish League players can’t cut it at International level. Sure in days gone by there were exceptions, but can you really convince me that Peter Thompson or Gary Hamilton have set the International stage alight? The only one who can claim to have made and impact in Europe in recent years is Glenn Ferguson, but I’m not sure being banned from Prague is quite what we’re looking for. Oval hero Hamilton was back for this match to show that he is more suited to the ‘big fish-small pond’ scenario. Alongside him was Kevin Braniff, showing good upper body strength and aerial ability, but demonstrating the main indication of his Irish League status, that is the ‘first touch syndrome’. That six Irish League players took part, along with a string of players from the lower English and Scottish leagues who were all captained by the unemployed Stephen Lomas pretty much sums up the quality on show. This was dubbed a showpiece match and had the players featured in the match programme squad lists turned up it would have been. But they didn’t so it wasn’t.

Now far be it for me to be pessimistic and condemning against a Milk Cup committee who persuaded the Irish FA that this would be a good idea. That they also persuaded me to purchase a ticket at £18 so that I could watch my childhood heroes Sean Webb and Sammy Morrow deserves credit also. As a marketing ploy (and I see it as little else) this was a financial success. The committee played the 25th anniversary card spot on. If half the Everton squad turned up to my 25th Anniversary I’d be reasonably happy although I’d be keeping an eye on the thirst and antics of Shandy van der Meyde. However, as much of a success as it was for the Milk Cup and its ego, it was equally a waste of time for Nigel Worthington. How many of these players changed the manager’s mind about whether or not they deserve a full cap? Dean Holden said he would walk from Falkirk to Windsor for the chance – Thing is Dean, so would I. And I’m crap. Holden played well, along with several other players including Keith O’Hara, but did they really show enough to say I deserve to play against Denmark, Spain, Sweden? I doubt it.

Now perhaps I’m mellowing as I get older, but I thought Ciaran Toner actually looked the part. He not only looked energetic and committed, but showed glimpses of quality in his passing and movement, particularly when he moved from right flank into the centre. There you go – A positive. It’s the only one I can find from an otherwise pointless affair.