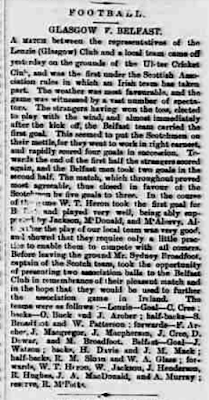 
A match between the representatives of the Lenzie (Glasgow) Club and a local team came off yesterday on the grounds of the Ulster Cricket Club, and was the first under the Scottish Association rules in which an Irish team has taken part. The weather was most favourable, and the game was witnessed by a vast number of spectators. The strangers having won the toss, elected to play with the wind, and almost immediately after the kick off, the Belfast team carried the first goal. This seemed to put the Scotchmen on their mettle, for they went to work in right earnest, and rapidly scored four goals in succession. Towards the end of the first half the strangers scored again, and the Belfast men took two goals in the second half. The match, which throughout proved most agreeable, thus closed  in favour of the Scotchmen by five goals to three. In the course of the game W.T.Herron took the first goal for Belfast and played very well, being ably supported by Jackson, M'Donald, and M'Aleavy. Altogether the play of our local team was very good, and showed that they require only a little practice to enable them to compete with all comers. Before leaving the ground Mr. Sydney Broadfoot, captain of the Scotch team, took the opportunity of presenting two association balls to the Belfast Club in remembrance of their pleasant match and in the hope that they would be used to further in Ireland.