With football comes singing, and with international teams at major tournaments come the ubiquitous singles.

So far I've added two CDs to my collection, both recorded by groups of fans. Whether the Northern Ireland players themselves will step into the studio to record their dulcet tones is yet to be seen.

Oui Norn Iron & Guests - We're On Our Way To France 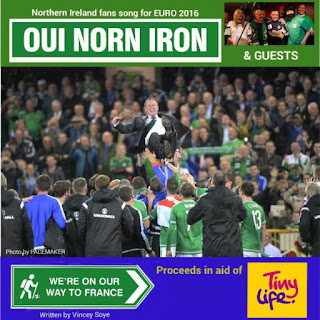 Written by Vincent Soy (who had previously penned Come on Northern Ireland for Mexico 86) and recorded by a selection of fans along with some local celebrities. Proceeds will go to TinyLife and support their work with premature babies.

More details on the We're on our way to France Facebook page.

The London Green & White Army - Making Our Way To Paris 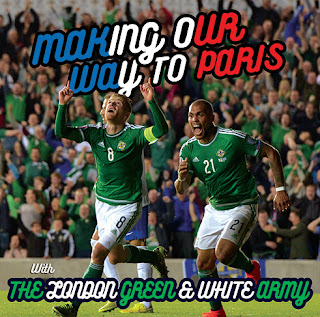 Making Our Way To Paris is a re-working of the old favourite Living Next Door to Alice made famous by Smokie. The new lyrics were written by Richard Cathcart and the song was recorded along with members of the London NISC. 50% of all profits will go to the Northern Ireland Cancer Fund for Children.

Good luck to everyone involved in both recordings.