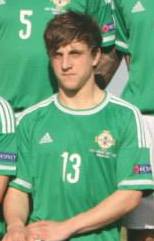 
Biography:
An exciting winger, Joel Cooper was invited to train with the senior Northern Ireland squad in the build-up to Euro 2016, and traveled to France to help out with training sessions.

Cooper had come to the attentions of senior clubs while playing for Ballyclare Comrades, representing the Northern Ireland Eastern Region at the 2015 UEFA Regions Cup. Glenavon won the race for Cooper's signature in June 2015. He earned rapid elevation to the Northern Ireland Under-21 squad while still just 19 and by the end of his first season at Mourneview he had won an Irish Cup medal following a 2-0 final win over Linfield.

In August 2017 Cooper left Glenavon to take up a two-and-a-half year scholarship in the USA at the University of New Hampshire. However, he returned to Glenavon in December and, despite being offered a longer-term deal, signed a pre-contract to join Linfield for the 2018/19 season.