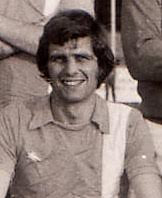 Biography:
Ballymena manager Alex Parker convinced the 21-year-old Magherafelt man to make the switch to the Ballymena Showgrounds in August 1968 and quickly became a mainstay of the defence of the Sky Blues. In his second season Averell started in the Irish Cup final in 1970, which United lost against Linfield at Solitude.


It was during this two year period in which Bobby won four Amateur International caps. Ballymena United entered the 1970s with great excitement as Arthur Stewart returned as player-manager and the club consistently challenged for trophies with Bobby Averell as one of the star players. Fittingly it was the big defender who scored the only goal of the game in the City Cup final against Ards in December 1971, which earned him his first senior medal.

However, amidst growing social unrest in Northern Ireland, Averell seized an opportunity in March 1972 to immigrate to Canada to play for the Toronto Metros in the blossoming North American Soccer League. Bobby spent two seasons in Canada alongside an international collection of team-mates and even managed to keep the world’s greatest player, Pele, at bay during an exhibition game against Santos.
Averell returned to Northern Ireland in January 1973 as Arthur Stewart brought him back home to Ballymena United and picked up another Irish Cup runners-up medal in 1974 following the defeat to Ards. His second spell at the club did merit two winning medals winning both the Gold Cup and the County Antrim Shield in the mid-seventies, the latter as captain. Injury curtailed the final years of his career and forced Averell’s retirement from the game at the end of the 1977/78 season. He had a short spell as a scout for the club immediately after his retirement.

In April 2008, Bobby was inducted into the Ballymena United Seven Towers’ Supporters Club ‘Hall of Fame’ as the player of the year for the 1970s. His son Richard also had two short spells at Ballymena United as well as Brentford and Glenavon.