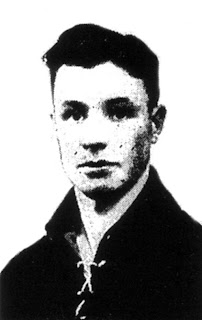 Biography:
A goalscoring winger, "capable of cutting in and snapping up chances", Harry Bell's "wandering" talents were obvious from a young age.

As a boy Bell played as right-back for St Barnabas' Church Lads Brigade and St Barnabas' Public Elementary School. By the time he joined Mountcollyer, still in his early teens, Bell had found his true position and subsequently claimed two Juvenile League medals and one in the McAlevey Cup over three seasons, finishing top scorer in each campaign.

It was while playing in the Bellevue Summer League that Bell made his first "big" move, joining Intermediate League side, Brantwood. There he played only a few games before transferring to boyhood favourites, Crusaders. His form at intermediate level was quickly rewarded with a move to the Irish League proper with Larne. He quickly established himself at Inver Park, impressing with his pace, control, centring and ability to "shoot while at top speed."

Bright things were predicted for Bell, and midway through the 1938/39 season he joined Linfield and shortly thereafter was awarded his only Amateur cap in a 1-1 draw with Scotland at Firhill.

Unknown said…
I believe this was my Uncle and if anyone knows anything about the background of his Father, also called Henry, please let me know. Thanks Deb
Sunday, September 22, 2019

Unknown said…
I believe this is my grandfather
Saturday, May 29, 2021

Family oroiginated from Islandmagee before moving to The Cavehill area NorthBelfast