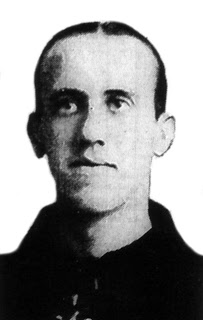 Club Career:
Biography:
A clever leader of the line, Gilbert Roden started in the Church League before signing with Carnmoney Comrades then joining Cliftonville Strollers.
Although recorded as "inexperienced and inconsistent" Roden earned rapid elevation to the senior Cliftonville team in 1938/39. He managed 11 goals in 18 appearances, including a hattrick in a 4-3 win over Ards and all the goals in a 4-0 route of Coleraine.
At the end of that first campaign Roden was selected for Ireland Amateurs against Scotland, and "he fully justified his inclusion in the team."
Later Roden played a single match for Linfield and for many years served as a respected football adminstrator.

Stuart Flint said…
This is my grandfather. His initials were G K definitely not G A.
Monday, February 22, 2021

jcd said…
Thanks Stuart. Could you tell me what the K stands for?
Tuesday, February 23, 2021

Stuart Flint said…
Hi again, sorry to come back again, should have got all the info in one hit. A bit more info:

He was born in Newtownbutler co Fermanagh. He played for all three Cliftonville teams Strollers, Olympic and the Senior team he also played for Ballyclare Comrades, and he played one game for Linfield.

After he stopped playing he was involved in football administration for many years.
Wednesday, February 24, 2021