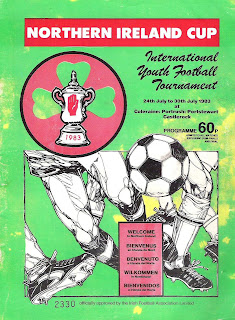 The Northern Ireland International Youth Tournament (popularly known as the Milk Cup due to sponsorship deals with the Dairy Council (until 2013) and Dale Farm (from 2014)) was founded in 1983 and is mainly played at venues in and around the north-coast, primarily centred on Coleraine. Initially a tournament for Under-16 teams (Premier level), an Under-14 (Junior) level was added in 1984, with an Under-19 (Elite) section added in 1995. In 2014 an Under-13 (Minor) Festival was added, featuring a Club NI selection.

The Elite section is now competed for by international sides, though previously club sides had also competed. The Premier and Junior tournaments are played for by club and regional select sides from around the world. Many future stars have competed at the Milk Cup including many Northern Ireland internationals.

In 2007 to celebrate the 25th Milk Cup tournament a Northern Ireland XI faced Everton in a celebratory challenge match.

The Elite Section for the 2015 Dale Farm Milk Cup was cancelled. The competition will become re-branded as the SuperCupNI from 2016 onwards.