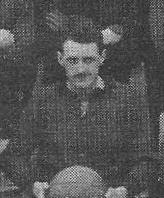 Biography:
Frank Heaney was a back with St James's Gate when they were one of the leading intermediate sides affiliated to the Irish FA and then the leading side in the first season under the FA of the Irish Free State, captaining them to the League and Cup "Double" in 1922.

Early in his career Heaney, along with his brother John, had been briefly on the books at Leeds City. He was brought into the team in December 1911 after a 5-1 home defeat by Burnley. Heaney was described as hesitant and slow as Leeds faired even worse, losing 5-0 to Wolves. He made just one more Football League appearance, in a 1-0 defeat by Derby County.

Capped at Amateur level prior to the Great War, Heaney returned to the international stage post-War, including for the first "foreign" trip to France in 1921. In 1924 he was selected for the Free State's squad for the Olympics, but he was not among the party that travelled to Paris.