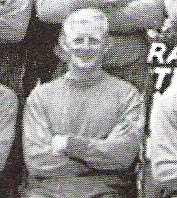 Biography:
Bangor's regular left-half during the early 1960s, Dickie Sands' good form earned him selection for Northern Ireland Amateurs in 1964. After a season with Crusaders he joined Ards where he enjoyed the most successful period of his career. He was Player of the Year in 1966/67 and a member of the Ards team that won the 1969 Irish Cup - he came off the bench to help set-up Billy McAvoy's equaliser in a final replay 4-2 extra-time win over Distillery. The following season he was again substitute in both Cup Winners' Cup matches against Roma. During his time at Castlereagh Park Sands added two further Amateur caps to his collection.