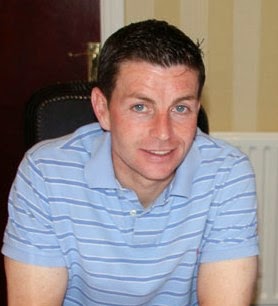 Biography:
A product of the famed Foyle Harps youth club, Eddie McCallion was a regular for Northern Ireland throughout their junior sides. He transferred to English Premier League side Blackburn at the age of seventeen but he stayed only briefly at Ewood Park before returning "home" to join Coleraine on loan. "Sparkling" form in the Irish League saw him selected in the Northern Ireland Under-21 squad to face Switzerland at Mourneview Park in April 1998 and he made his only appearance at that level as a substitute in a 2-1 win.

In September 1998 McCallion joined Derry City where he regularly featured at right-back or centre-back for over a decade and throughout some tumultuous times for the club. Highlights included two FAI Cup and four League Cup wins as well as a UEFA Cup run that saw French giants Paris Saint-Germain held 0-0 at the Brandywell. There were also severe financial problems during this time, culminating in the club's demotion in 2009, however they subsequently bounced straight back as First Division champions.

After nearly fourteen years at the Brandywell, McCallion was signed by Glenavon manager, and ex-Blackburn teammate, Gary Hamilton. After two-and-a-half seasons at Mourneview he moved briefly to Bangor then nearer home to Institute. His stay with Stute was brief as he returned to Derry as a coach.

Eddie's older brother, Tommy, also represented Northern Ireland at Youth and Schoolboy level in a career that took in spells at Coleraine, Cliftonville, Derry City and Glentoran. The pair played together in Derry's 2002 FAI Cup win.