Biography:
Exciting young Cliftonville forward, Liam Boyce has been linked with moves across the water and further afield. He transferred to Werder Bremen on August 2010 deadline day.

Boyce made his Cliftonville debut on 1st October 2008 against Glentoran and scored his first goal in a 2-2 draw with Linfield towards the end of that season. The following season he finished as the Reds' top scorer, his goals firing the team to the runners-up spot in the Carling Premiership and earning him the Ulster Young Footballer of the Year title. He was also awarded the Goal of the Season award for a strike against Distillery. He opened the 2010/11 season in fine form, scoring in a Europa League qualifier against CSKA Sofia.

In the summer of 2010 Boyce spent time training with Celtic and a move to German Second Division team, SpVgg Greuther Fürth after a successful trial stalled at the final hour. He returned to Cliftonville where he made, what turned out to be, his final appearance against Crusaders on 27th August as he scored in a 3-1 win. Within days he was back in Germany, making a dream move to one of the giants of European football, Werder Bremen. He has been named in Werder's reserve/under-23 squad who play in the 3. Liga, the third tier in the German pyramid.

Boyce made his senior international debut as a late substitute in a 3-0 Carling Nations Cup defeat by Scotland in Dublin on 9th February 2011.

It was announced during the summer of 2011 that Bremen would allow Boyce to leave if a suitable deal could be agreed. He subsequently spent trial periods with Oxford United and Bologna and eventually returned from Germany after being released from his contract that October. He then spent an unsuccessful trial spell at Kenny Shiels' Kilmarnock before eventually returning to Cliftonville.

On his return to Cliftonville Boyce quickly rediscovered his form and revealed a versatility not previously witnessed by Irish League followers. His goals set a club record and fired the Reds to the title and an Irn Bru League Cup win in 2012/13 and saw his name linked with a move back to full-time football. He remained at Solitude for another year as the Reds claimed consecutive titles for the first time in their history and traveled with the Northern Ireland squad that toured South America, though didn't make it on to the field.

Shortly after his return from international duty Boyce was signed by Scottish Premiership side, Ross County. He spent much of his first season building fitness before establishing himself in the closing months of the campaign and he then re-established himself in the Northern Ireland squad. By the 2015/16 season he was among the most feared strikers in the Scotland, and he was topscorer with four strikes as County won the League Cup, though he was unable to find the net in a 2-1 final win over Hibernian. He was unfortunate to miss out on a place in Northern Ireland's Euro 2016 finals squad as his form dipped late in the season following an injury.

Boyce returned to his goalscoring ways early in the 2016/17 season, regained his place in the international set-up and was awarded the SPFL Player of the Month award for August. His good form continued throughout the season and with 23 goals he finished as the Premiership's topscorer, which included a four goal haul against Inverness in April as he collected another monthly award.

In the summer of 2017 Boyce moved to English Championship side Burton Albion for a fee reported to be the highest ever paid by the club. 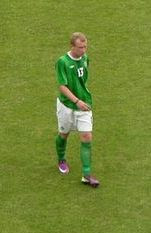