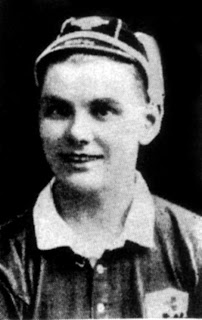 Biography:
Thomas Wilkins began his playing days with Sydenham a team made-up of "pals on and off the field". It was from there he made the short move to Glentoran where he developed into an adept left-winger with the Seconds. He made his senior debut during the 1931/32 season and scored his first goal in November 1932 against Bangor. However, firstteam appearances were few and far between, and even with the Seconds he found himself side-lined for the 1932/33 Steel Cup final. His craft was recognised with selection for the Irish Junior International side, and "he certainly didn't let the selectors down". As a player he had a "style that was attractive on the line" and could "develop some pretty movements weithout introducing frills". It was a move to Bangor, where the sea air proved a tonic, that seemingly set Wilkins career on the right path, his pace leaving less-alert and lively defenders cold and his well-timed centres providing ready ammunition "when the men in the middle are well placed". A popular player with the crowds, he earned his only Amateur cap following a move to Newry, finally earning the recognition that was predicted for him at the outset of his career.