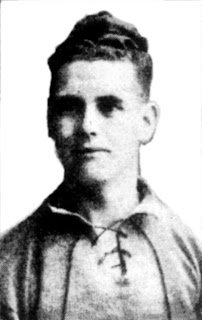 Biography:
A "player with a big heart, Rosbotham is a capable and trustworthy defender and capable and resourceful in initiating and backing up an attack."

Jimmy Rosbotham's career stuttered its way to the senior ranks. He was briefly on the books of Belfast Celtic and played a few games as an outside-left with Ards in between spells with Brantwood. It was while while with Brantwood that he featured for the Intermediate League against the Glasgow Central League at Clydeside in March 1933. It was shortly after this match that Glenavon showed an interest in him and it was as left-half at Mourneview that he first enjoyed a settled period in the Irish League proper. "Not afraid of legitimate shoulder work", Rosbotham was first selected for Ireland Amateurs in April 1936 and he retained his place in the side for the next two internationals. In the late-1930s Rosbotham joined Linfield where he claimed his only major honours, including the Irish Cup after a 2-0 final win over Ballymena in 1939. He also made two inter-league appearances while at Windsor Park.