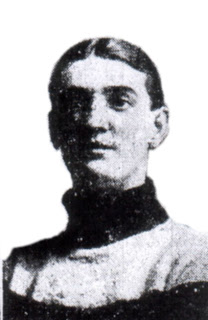 Biography:
When Ireland's annual Amateur international series with England resumed after the First World War, the man honoured as their first goalkeeper was Cliftonville's Dan Peck. It proved a difficult day for the Irish and Peck had to pick the ball out of his net five times in front of a 5,000 crowd at Derby County's Baseball Ground.

A product of the 5th Company of the Boys' Brigade, Peck signed with Wandsworth for a season. He then played with Mountpottinger where his rival for a place between the posts was Lidell, later of Glentoran. It was while playing with Woodburn that Peck drew the attentions of Cliftonville, where he established himself as regular goalkeeper during the Great War. He kept his place until displaced by another amateur international, Nat Adams, in the 1920/21 season.

Later Peck played with Crusaders, then an intermediate club, where he claimed a Steel & Sons Cup winner's medal in 1923, following a 3-1 second replay win over Bangor. His brother had also played as a full-back for the Crues.