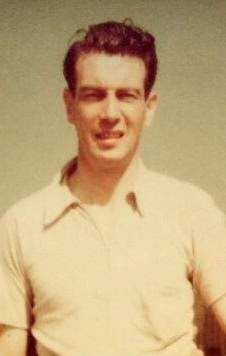 Biography:
Kevin McAlinden, a member of a prominent Belfast bookmaking family with a long-standing association with Belfast Celtic, actually excelled at Gaelic football as a teenager. While attending St Malachy's College he represented Ulster in the All-Ireland Inter-Provincial Colleges Championship. The skills he picked-up on the Gaelic field transferred successfully to his soccer career "in the sure, safe way he catches the ball" when he joined Belfast Celtic.

As understudy to Tommy Breen at Celtic Park, McAlinden spent two seasons in the Seconds, during which time he collected a host of medals, including a clean-sweep of Intermediate honours (League, Cup and Steel Cup) in 1935/36 as well as a Junior cap against Scotland. When Breen was transferred to Manchester United in 1936, McAlinden was promoted to the first team and played his part in five consecutive league title wins.

An injury side-lined McAlinden in 1941 and he was replaced by the returning Breen then ex-Glenavon keeper, Hugh Kelly. McAlinden then moved south with great success. With Cork United in the 1942/43 season he claimed a League title and an FAI Cup runners-up medal and was selected for the League of Ireland. He retired from playing in 1943 to concentrate on his Co. Meath farm, but the call of playing was too strong and he signed with Shelbourne early in the 1943/44 season, claiming a League of Ireland Shield before leaving in December. 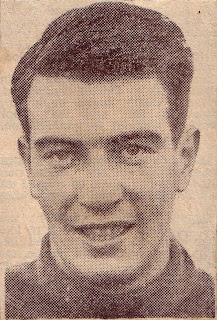 When a call went out from Dundalk in December following a wrist injury to their regular custodian, Freddie Kiernan, McAlinden again answered. His performances brought him further inter-league honours and selection for an FAI XI in an prestigious exhibition match against the Irish Army in April 1946. On 26th April 1947, back at Belfast Celtic, McAlinden collected his third Irish Cup winner's medal following a 1-0 win over Glentoran at Windsor Park. The following season McAlinden signed for Coleraine. He was in the Bannsiders side that defeated Belfast Celtic in the Irish Cup semi-final only to lose out to 0-3 to Linfield in the final.

In the summer of 1948 McAlinden was selected for the Great Britain squad for the London Olympics. The other goalkeeper in the squad was Queens Park's Ronnie Simpson, later of Lisbon Lions fame, and it was he that was preferred for the opening match, a 4-3 win over the Netherlands at Highbury. McAlinden was selected for the 1-0 second round win over France at Craven Cottage and the 1-3 semi-final defeat by Yugoslavia at Wembley. Simpson was back in the team for the 3-5 "Bronze Medal" match defeat by Denmark.

McAlinden returned to Belfast Celtic for the 1948/49 season, their last in the Irish League. He reportedly received threats prior to the infamous Boxing Day clash against Linfield. He elected to play and was one of those targeted by rampaging fans. The injuries he picked-up ruled him for several months, but he returned for the final games of the season and the summer tour of the USA that marked Celtic's swansong.

Dundalk FC Who's Who 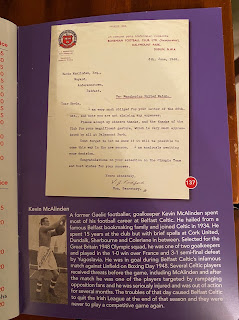 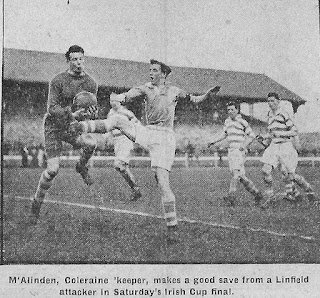 Posted by Irish Football Memories on Tuesday, 26 May 2020