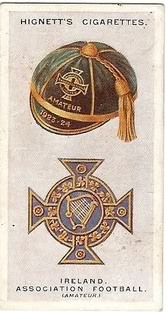 The Ireland Amateur team played their first match in 1906, losing 2-1 to England at Dalymount Park. The team's first-choice colour was green (unlike the full international side who at the time usually wore blue). Aside from a single match against France in 1921, England were the only regular opponents until 1929 when an annual match against Scotland was first contested.

In 1953/54 Ireland faced Wales for the first time, thus allowing an Amateur Home Nations Championship to begin. From then until 1974 all matches were part of the Home Nations series, with the exception of a match against a touring South Africa side in 1954. Northern Ireland never entered the UEFA Amateur Cup which began in 1966/67 and ran through to 1978 (since succeeded by the Regions' Cup).

The Northern Ireland Amateur side was discontinued in 1974 as the Home Nations abolished official amateur status.