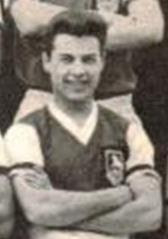 
Biography:
Jimmy Quail was a two-time FA Amateur Cup winner with Hendon. In 1960 he played in front of 60,000 at Wembley as Kingstonian were defeated 2-1. Five years later and another Wembley victory was witnessed by a 45,000 crowd with Whitby Town defeated 3-1, Quail slamming home Hendon's second and his pass setting up the third. A double leg break in the 1966 quarter-final against Wycombe Wanderers robbed him of another final appearance as Hendon lost 1-3 to Wealdstone in his absence.

A player who could control a game, his passing range capable of putting any defence under pressure. Five months after his first Amateur Cup win, Quail was awarded his first amateur cap by Ireland. He scored in both halves, but England won 3-2 at High Wycombe. He won a second cap the following January in a 1-4 defeat by Wales at Portmadoc. He later played for the Great Britain Olympic side, scoring in a trials match against Coventry City.

Regarded as among Hendon's greatest ever players, when he finished playing in the 1970s Quail remained actively involved at the club and was manager during a successful period.

Anonymous said…
Jimmy Quail was a highly skilful inside forward who was regarded primarily at his amateur clubs as the "general" of the forward line. Highly adept in ball control and a pass master who also had an impressive record as a goal scorer. It is said that he was once chosen to represent Northern Ireland in a "full" international match but declined the invertation as it clashed with an important club fixture. A truly wonderful player who produced some memorable performances.
Monday, April 23, 2018