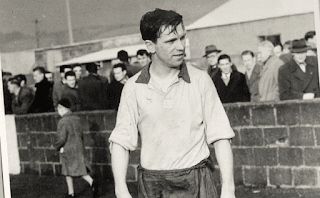 Biography:
Before he took to football, "Dangerous Dan" McCaffrey had been a gifted Gaelic footballer, winning Ulster and All-Ireland Minor (scoring the winning goal in the final) titles with Omagh St Enda's in 1946 and 1947 respectively, before progressing to Tyrone's Senior panel. A centre-forward with "plenty of punch" to his game, he first played Irish League football for Derry City during the 1952/53 season. It was during a purple patch infront of goal early in the 1954/55 season for Crusaders that McCaffrey was called into the Ireland Amateur side. He failed to find the net in a 5-0 defeat by England at Selhurst Park.

McCaffrey's time with the Crues proved to be brief as he moved to England in late-October 1954, signing with Southern League side, Worcester City. His prodigious workrate, "rampaging and all action style" and prolific strike rate made him a cult hero with the Worcester fans. At the end of two year contract McCaffrey joined Yeovil for a small fee of £300 for what turned out to be a brief and unproductive spell. By late December 1956 McCaffrey had joined Boston United where his post-Christmas form fired to third place in the Midland League.

For the 1959/60 season McCaffrey was playing with Sligo Rovers where he finished topscorer with fifteen goals (ten in the League of Ireland) in his only season with the club.

With Drumcondra during the 1960/61 season McCaffrey hit the form of his life and a total of fifty goals in all competitions. This prolific form saw him claim the inaugural Sports Writers' Personality of the Year Award and pick up winner's medals in the league, City Cup and Top Four Cup. The only disappointments were defeats to St Patrick's Athletic in the FAI Cup final (though he scored the opener for Drum's before St Pat's came back to win 2-1) and to Dundalk in the Leinster Cup. His 29 league goals, which included two five goal hauls, not only saw him finish as the competitions topscorer, but set a club seasonal record.

Among his eleven goals for Drumcondra during the 1961/62 season was a strike in the 3-0 President's Cup final win over St Patrick's Athletic and before he left he had also claimed a League of Ireland Shield winner's medal. In February 1962 he joined Waterford and then spent an injury curtailed season with Cork Hibernians in 1962/63. In December 1963 McCaffrey joined Drogheda and at the end of that season he left senior level football behind at the age of 34.

Later McCaffrey played with his hometown club, the fledgling Omagh Town. He also worked in the motor trade in the local area. Also a keen follower of horse racing, Dan McCaffrey passed away in June 2016 at the age of 86.

Based on information supplied by Jim Murphy.