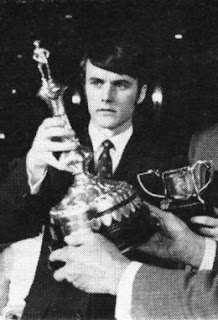 The diminutive sharp-shooter of Ards, Billy McAvoy had written his name into the club’s record books while he was still in his early twenties…

Biography:
Billy McAvoy – or “Mac the Knife” to Ards Supporters - had risen through the ranks at Castlereagh Park, making his Irish League debut on 27th February 1965 against Coleraine. He quickly found himself among the goals, and by the late-‘sixties was a fixture in the Northern Ireland Amateur team, vying with Ards teammate Ray Mowat for a place on the right-hand side of attack. In March 1968 McAvoy was selected by Billy Bingham at centre-forward for an Under-23 international against Wales, just five days after he had played in a 2-0 Amateur international defeat against Scotland in Greenock. The match against the Welsh finished in a 1-0 win with Coleraine’s Sean Dunlop scoring the only goal.

With his name hotly linked with a cross-channel move, McAvoy embarked on the 1968/69 campaign with some confidence. Five Ulster Cup goals in the opening weeks of the season plus one in the Gold Cup as Ards suffered an early exit in an exciting 3-2 defeat by Glenavon were only just the beginning. As the League campaign began in September McAvoy really hit his stride. In a 22 match campaign he scored twenty goals, only one behind the League’s top goalscorer, Derry City’s Daniel Hale. Six strikes in the City Cup and one in the Co. Antrim Shield failed to bring Ards any silverware - the Irish Cup was to be a different matter.

Ards made quiet but steady progress to the 1968/69 Irish Cup Final. A 1-0 win at Portadown in the First Round was followed by a comprehensive 4-1 home win over Crusaders. In the semi-final they faced Bertie Peacock’s much-fancied Coleraine side at the Oval, slipping through 1-0. The Final at Windsor Park saw Ards manager George Eastham pitted against ex-club, Distillery. The match itself was largely disappointing, played on a hard pitch it produced just one major talking point as McAvoy had a good penalty shout turned down after he was seemingly fouled by Joe Conlon in the 70th minute. The game finished scoreless and a replay was set for the following Wednesday. 16,000 turned up at Windsor, 1,000 less than for the first match, to watch a ding-dong battle. The Whites led 1-0 at half-time, but within minutes of the re-start McAvoy equalised, capitalising on a bad back-pass from Peter Rafferty. A minute later Conlon headed Distillery back in front from a corner, but just before the hour mark McAvoy brought the scores level again, benefiting from good inter-play by Dickie Sands and Billy Humphries. With the match in extra time, McAvoy completed his hattrick in the 104th minute, and made it four three minutes later despite struggling with an injury. That was only the second time that a player had hit four in an Irish Cup Final, Joe Bambrick having scored all Linfield’s goals in their 4-3 1930 victory over Ballymena.

1968/69 also brought McAvoy Inter-League recognition when he played at inside-left in a 2-1 defeat by the League of Ireland, plus the Ards Player of the Year and Ulster Footballer of the Year titles. McAvoy struggled to recover from the injury picked up in the Cup Final through the summer of 1969, and it may have been that which cost him a cross-channel career. As the 1969/70 season kicked-off he was still less than one hundred percent, and although he put in hard-working performances in the 0-0 draw against Roma in the Cup Winners’ Cup at the Oval and in the 3-1 defeat in Rome, it was to be some time before he was back to his old ways. Still the season proved reasonably successful for Ards, they were runners-up in the Co. Antrim Shield and third in the League. The campaign also saw what is rated as McAvoy’s best game, as he claimed all four goals in a 4-1 win against Portadown on Easter Monday.

Ards continued as a major force in Northern Ireland football, particularly in Cup competitions. In 1972 they won the Co. Antrim Shield, defeating Crusaders in the final, and were losing finalists in the Gold Cup. In 1973 they were double runners-up, losing the Carlsberg Cup 3-0 to Portadown (with McAvoy missing a penalty) and finishing one point behind Crusaders in the race for the Irish League title. 1972/73 proved McAvoy’s most successful in front of goal with 43 in all competitions, but it was the following campaign that claimed him the most medals.

Early in the 1973/74 season Castlereagh Park hosted its first ever European game, with Belgian giants Standard Liege the visitors in the UEFA Cup. Ards claimed a memorable 3-2 win, McAvoy scoring from the penalty spot. That was the first time an Ulster club had claimed a win in that competition, but the 6-1 defeat in the return leg proved a disappointing exit. Still the Ulster Cup was won in mid-October, followed quickly by a Gold Cup Final victory over Bangor. A poor Irish League campaign saw Ards finish in a lowly eighth place, but more cup success followed. In their run to the 1974 Irish Cup Final Ards saw off Bangor and Glenavon, both 4-2, to set up the decider against Ballymena. McAvoy once again proved himself the man for the big occasion, scoring the winner in a 2-1 victory at Windsor Park. The following month Ards played in their third cup final of the season, claiming their fourth trophy, with Ballymena again defeated 3-1 in the Blaxnit Cup.

McAvoy remained Ards’ main goalscoring threat for much of the ‘seventies, taking his goal-tally to a club-record 301, though he was unable to add further medals to his collection. In October 1977 he made a big-money move to Ballymena United, though he found form hard to come by in a sky-blue shirt and managed just eight goals in two seasons at the Showgrounds.

Later McAvoy would become manager of a Larne building society. He stayed involved with football as a coach in junior football before moving to Scotland.