Shane Duffy, a product of Everton's Academy system, is a big defender, strong in the tackle and dependable in the air. He moved to Merseyside in November 2007 and signed as a scholar at Goodison the following summer.

Capped by Northern Ireland as a youth, he was part of the successful 2008 Milk Cup Under-19 squad. In May 2009, still just 17 years-old, he was called into the B squad against Scotland and a month later was included in the full squad to face Italy in Pisa. In August he put in an impressive performance in an Under-21 friendly against Portugal, confidently slotting home a second-half penalty.
..
Duffy made it on to the Everton substitutes bench for the opening game of the 2008/09 Premier League season. He made his Toffees debut against AEK Athens in the Europa League on 2 December 2009.
..
On 22 February 2010 Duffy was included in the Northern Ireland squad for a friendly in Albania. He withdrew from the squad the same day, announcing that he would rather play his international football for the Republic of Ireland, the country of his father's birth. He suffered a life threatening liver injury after a collision during a Republic of Ireland training match in May 2010, though gladly no permanent damage appears to have been done. 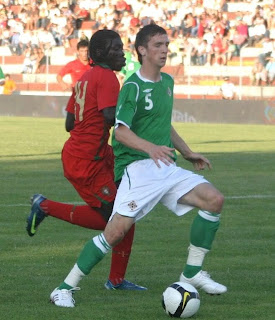