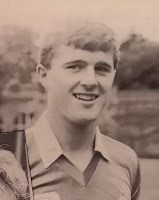 Biography:
Portsmouth-born Paul Gray grew up in Northern Ireland, winning youth caps and playing in the Bangor firstteam as a teenager. He moved to Luton in May 1986 and made his firstteam debut in February 1988 against Everton in the Simod Cup during the Hatters' run to the 1987/88 Final. In June 1988 he signed professional terms and in December 1989 he made his Football League debut against Arsenal as a substitute for Kingsley Black. He scored his only League goal for Luton in a 3-2 win over Coventry in March 1990 on a day when the other scorers were Black and Iain Dowie - an all-Northern Irish scoresheet!

At the end of the 1989/90 season Gray played for Northern Ireland in an Under-21 international against Israel in Coleraine, and a month later appeared for a "full" Northern Ireland team against Spurs in Danny Blanchflower's testimonial. Gray was back in Luton's reserve team for the 1990/91 season and made no further firstteam appearances prior to joining Wigan Athletic in the 1991 close-season. He made his Latics debut as a substitute against Shrewsbury on the opening day of the season and he was beginning to make an impression on the starting eleven before being ruled-out by a serious ankle injury picked up against Hartlepool.

After close to two seasons out, Gray made his playing come-back with ex-club, Bangor. Although he struggled to make an impact with the Seasiders he was named "Personality of the Round" after coming off the bench to score two goals in a superb 10-minute spell in the 1993 Irish Cup quarter-final win over Glentoran as Bangor marched to the Final. Gray didn't make the team for the Final and his appearances thereafter were sporadic. His only other goal while with the Clandeboye-club was in a 3-3 draw with Coleraine in March 1995. 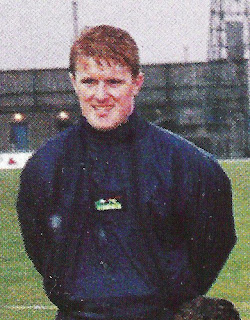 After another eleven months without a firstteam appearance, Gray left Bangor for Ards. His luck failed to change at Castlereagh Park and he made just four appearances from the bench in two seasons.

Among Gray's Northern Ireland Youth team appearances was a UEFA Under-18 Championship qualifier against Norway at Clandeboye Road on 7 May 1987. In the Norway side was Stig Inge Bjornebye, Lars Bohinen and Roger Nilsen, all of whom went on to play in the English Premier League.

Anonymous said…
paul had great talent at an early age running rings around everyone in the street.his father roy gray was a constant support,trainer,and man of wisdom.it was great to read the bio since i left northern ireland in the early 80's.well done paul,but im not surprised,you were the "grayhound"...tommy,childhood friend,los angeles ca.
Wednesday, January 11, 2012