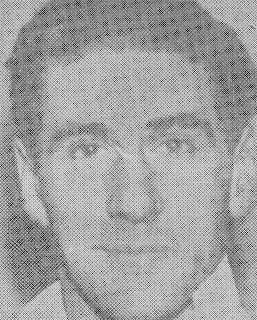 Biography:
Kevin O'Flanagan was a multi-talented sportsman. He was capped at international level in football and rugby, was a Gaelic footballer for Dublin Minors, an Irish champion at athletics, a scratch golfer and an accomplished tennis player. His younger brother, Mick, was also a dual-code international having represented southern Ireland at football and Ireland at rugby.

O'Flanagan, already an Éire Junior international, made his international bow at the age of just eighteen as the FAI's Ireland side drew 3-3 against Norway in a must-win World Cup qualifier. A win would have sealed qualification for the 1938 World Cup Finals in France, though the youngster made do with a goal (according to some sources the team's 50th) having had another ruled out for off-side in the opening minutes. He remained a regular for the FAI team until after the War.

As a teenager O'Flanagan had combined his association and Gaelic football codes with some success, that is until is daliances with the "foreign game" were discovered and the GAA issued him with the mandatory life-ban. It wasn't until he was studying medicine at University College, Dublin that he first tried his hand at rugby and he proved a natural, first earning selection for Leinster in 1940 and for an Ireland XV that faced the Army at Ravenhill two years later. In parallel with his successes in team sports he was a four-time Irish long-jump champion and Irish sprint champion at 60 and 100 metres.

O'Flanagan rose to captain the all-amateur Bohemians club and in 1945 his goalscoring, and that of brother Mick, fired the club to an FAI Cup Final appearance against Shamrock Rovers and a Intercity Cup Final win over Belfast Celtic. O'Flanagan did blot his copy book against Celtic as he was sent-off.

In 1945, after completing his studies, O'Flanagan took a medical post in Middlesex. He signed amateur forms with Arsenal, turning down a professional deal so that he could continue playing rugby. He scored on his Gunners debut in a 6-2 Football League South defeat by Charlton in October 1945 and finished the last War-Time season as the club's topscorer with eleven goals, mainly from the wing. He was also honoured by the IFA for the first time with selection for the Victory Internationals against Scotland and Wales.

Nicknamed "The Flying Doctor", with the oval ball O'Flanagan was turning out with London Irish and played for an Ireland XV against France on 26 January 1946 in an unofficial international. Two weeks later he missed out on an appearance against England at Lansdowne Road in the Five Nations as he was fog-bound in London.

O'Flanagan made his Football League-proper debut against Blackburn in a 3-1 defeat in September 1946 but played just fourteen times in that first post-War season due to work and, to a lesser extent, rugby commitments. In December 1947 he lined out for Ireland in a test match against a touring Australia side for his only full rugby cap.

Although he remained on the books at Highbury until 1949, O'Flanagan made no further appearances for Arsenal. He did play non-league football with Corinthian Casuals and Barnet, earning a first Amateur Ireland cap as centre-forward against England in February 1949. During the 1949/50 season he played with Brentford, and won a second Amateur cap, scoring a second half consolation from outside-right, before his playing career was ended by an ankle injury.

In 1948 O'Flanagan, who would have likely appeared at the Olympics of 1940 and 1944 had they not been cancelled due to the Second World War, was appointed to the British Olympic Medical Committee and so began a five decade association with the Olympic movement. With his own sporting days behind him, O'Flanagan became an acknowledge sports injury expert, worked with the Irish Olympic team and in 1976 was appointed to the International Olympic Committee.