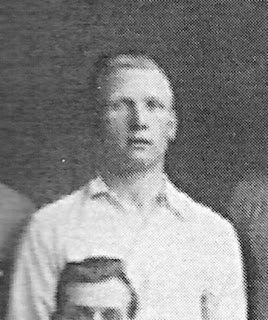 Biography:
"Silver Bob" Thompson took to football while serving in the army and played at junior level in and around his native Lisburn before being offered a trial by Distillery towards the end of the 1923/24 season. A sturdily built full-back, fearless, robust and strong in the tackle he did not "... go in for finesse, but [preferred] the direct route".

Thompson had a remarkable end to his first season in senior football. On 17th March 1925 he scored the goal that took the Gold Cup Final against Queen's Island to a replay. On 21st he was part of the Whites team that saw off Glentoran 2-1 in the Irish Cup Final. On 8th April he played in the 2-0 Gold Cup Final replay win over Queen's Island at Celtic Park and he topped-off his season with selection for Amateur Ireland for their match against the Irish League on 11th May.

Thompson joined Dundalk GNR early in their first season as a Free State League club. He made his debut against Shamrock Rovers 11th September 1926 and was the club's regular right-back throughout a challenging first campaign. He was entrusted with penalty duties, scoring five times from the spot to make him equal topscorer for the Lilywhites.

After one season at the Athletic Grounds Thompson returned north to join Queen's Island. While with the Island he returned to the Amateur international scene and also appeared in an "experimental" Irish League-based Full international line-up against France. Late in the 1927/28 season Thompson moved on to Linfield though he spent just a year before transferring to Plymouth Argyle in April 1929.

Although Thompson spent four years with Plymouth, during which time they claimed the Division Three South title, he did not make an appearance in League football. In 1938 he was appointed trainer-coach of Portadown and his younger brother, George, played with Linfield in the early-1940s.