Biography:
Most remembered for his successful Belfast-based sports store, Sammy Moore was a leading amateur sportsman himself from the 1920s through to the 1950s - he excelled at football, water polo, golf and cricket.

A goalkeeper on the football field, Moore started out with Belfast Combination club, Nettlefield. He moved on to play for Bangor, for whom he featured in the three games it took to settle the Steel and Sons Cup Final in favour of Crusaders in 1922/23. Two years later, then with Willowfield, he had a little more luck as he claimed an Intermediate Cup winner's medal.

There then followed a lengthy return to Bangor where Moore would star in their earliest Irish League days. Finally Moore joined Cliftonville where he played until his retirement. With the Reds, Moore's appearances were limited by the presence of international 'keeper Alfie Gardiner. Gardiner was also the regular choice for Ireland Amateurs and it was when he was unavailable that Moore stepped in for both club and country.

As a golfer, Moore had a handicap of three and was a member of the Belvoir Senior Cup team for ten years during which time they won the All-Ireland Senior Cup. In 1946 he partnered Fred Daly - who was soon to be Open Champion - in a Hermitage amateur-professional scratch foursomes win.

As a strong swimmer, Moore played water polo for East End for 25 years, reaching his peak when selected for Ireland's 1928 Amsterdam Olympic Games squad. He was also the holder of numerous life-saving awards and on one occasion saved the life of a companion.

At cricket, Moore was skilled as a batsman, bowler and slip fielder, playing with Nettlefield in the Belfast Cricket League. 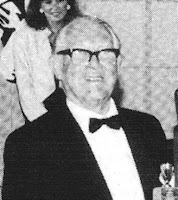 With his own illustrious sporting days behind him, Moore was a director at Distillery and Ards and a member of the Co. Antrim FA's council for many years. He regularly accompanied the Northern Ireland international squad on foreign trips - visiting Bulgaria, Turkey, Russia, Finland and Israel. While in Israel he suffered the misfortune of breaking his pelvis after falling off a camel at the Mount of Olives.

Sporting prowess followed in the family. His brothers Eddie and Andy both played football with some distinction. Eddie as goalkeeper with Larne and Ormiston and Andy played outfield with Bangor and Willowfield. His four sons likewise were keen sportsmen at football, rugby, golf and skiing.

Sammy Moore's name lives on through the business he founded S.S. Moore Sports, for many years supplier of kits and match balls to the Irish FA.