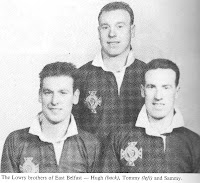 Biography:
Tommy Lowry was the most notable member of a famous east-Belfast footballing family, his brothers Sammy (Glentoran), Hugh (Ards) and John (Ards Reserves) all playing to a high standard.

As a teenager Tommy was scouted by Doncaster manager Peter Doherty, who offered Lowry a trial. During his time in England he lodged with Harry Gregg who took the youngster under his wing. It didn't work out for Lowry in England and he returned home for spells with Distillery, Glentoran, Larne and, most notably, Ballymena. He particularly enjoyed playing against Jackie Milburn, not giving the the ex-Newcastle forward an inch during his time at Linfield. It was while with the Braidmen that Lowry was first touted as a potential Ireland international, but he was never to win a cap.

Eventually Lowry was given another chance across the water when signed by Falkirk mid-way through the 1959/60 season. As his stature as one of the finest centre-backs in Scotland grew, Lowry was linked with moves to Newcastle, Sunderland and Rangers. He was the "Toast of Falkirk" until a bitter fall-out precipitated his exit from Brockville. Again he was linked with a host of clubs, Middlesbrough and Leyton Orient among them, but instead he returned "home".

Lowry settled in Lurgan and played for Glenavon. He was briefly caretaker manager at Mourneview, but refused a permanent position because he didn't want the hassle from colleagues at his job in a local creamery. He did later manage Distillery from February to September 1981.

Tommy Lowry remained outspoken in his views on local football up until his death in 2004. 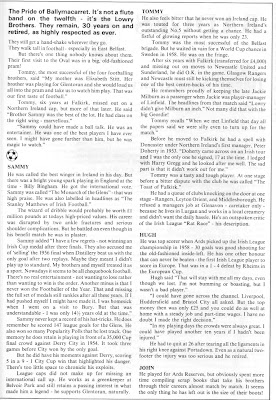 With thanks to John Meffen (Falkirk FC Historian)