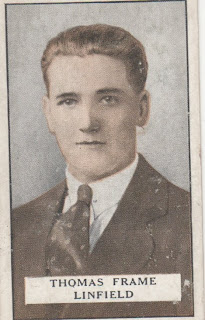 Biography:
When left-back Tommy Frame joined Linfield on the eve of the 1921/22 season he could not have imagined what his first campaign in senior football was to bring. No Linfield player appeared more times as the team brought seven trophies back to Windsor Park, losing just once along the way. Frame was rewarded early on at representative level, earning selection for Amateur Ireland against England.

Prior to joining Linfield, Frame had played much of his football at inside-left before proving he was more suited to defence, where he was described as "sturdy and strong [and a] grim tackler".

Although Linfield struggled to reach the heights of the 1921/22 campaign through the remainder of the decade, Frame did appear in another two Irish Cup Finals, collect a total of four Co. Antrim Shield winner's medals but just one further Irish League title. He appeared four time for the Irish League between 1922 and 1929 but on each ocassion the team suffered heavy defeats. 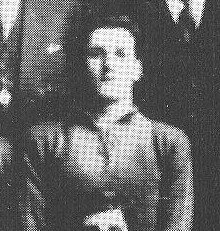 In September 1924 Frame was awarded his only cap for Ireland. He was selected to face a touring South African side as the Irish FA decided to select a soley local-based eleven to reduce travelling expenses. The Africans, in what is regarded as their first ever international, recorded a 2-1 win at Solitude despite an early goal from Frank Rushe giving the Irish the lead.