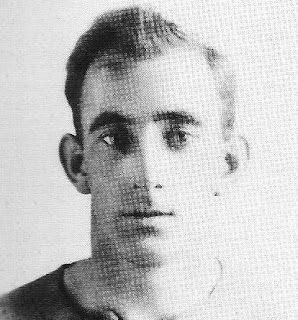 Biography:
A clever winger, capable of centering the ball "in fine style", Harry Wilson was with Distillery and briefly Belfast Celtic before joining the army in September 1914. He was a prisoner of war towards the end of the First World War but once demobbed he resumed his playing career with Dumurry. While playing in intermediate football Wilson gained Junior international recognition and also represented the Intermediate League.

A return to senior football arrived with Glenavon in the summer of 1920, but Wilson stayed only briefly at Mourneview. In October of that year he made the journey across the Irish Sea to join Hull City of the English Second Division. A regular for the Tigers from his arrival, his stay lasted just a season before he transfered to Charlton Athletic.

By 1923, after a spell with Welsh side Aberaman Athletic, Wilson returned to Belfast to play with Linfield. Although the major honours eluded him during his stay at Windsor Park, Wilson was selected three times for the Irish League and twice, as stand-in for Arsenal's Joe Toner, for Ireland. Later he also played Irish League football with Larne.

With thanks to Martin O'Connor.

Claire Wilson said…
This is my great grandad! :) just been looking up family history so this really helps thanks! x
Wednesday, April 04, 2012