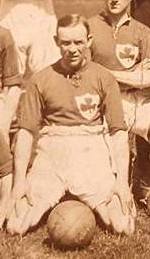 Biography:
Dick "Baldy" McCracken served in with the 13th Battalion of the Royal Irish Rangers during the First World War and was wounded at the Somme, a battle in which his brother Geordie was killed. After a lengthy spell recuperating in Beaufort War Hospital in Bristol, Dick returned to his Co. Down home. 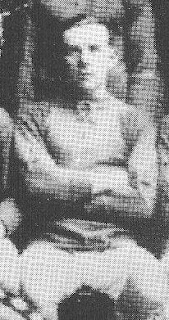 A star of Linfield's seven-trophy season of 1921/22, McCracken helped himself to twenty goals that season, including the winner in the Irish Cup Final. "One of the most whole-hearted players that ever wore a blue jeresey," McCracken featured most regularly at inside-right but he was also put to great use in more defensive roles as right-half and, against Distillery in the Co. Antrim Shield Final, as right-back.

It was as right-half and captain that McCracken played in both matches of the Norway tour in the May 1922, indeed he scored in the second match, a 3-1 win over a Norwegian FA XI. Although he never appeared in another major representative fixture after 1922, McCracken kept up his good club-form, scoring the opener in the 1923 Irish Cup Final win over Glentoran.

Dick McCracken lived out his days in his hometown of Annsborough along with his wife Ethel and three children. He passed away in 1969.

Trevor Clydesdale said…
Served during World War 1 and fought at the Battle of the Somme where his brother George was killed in action on the first day
Wednesday, June 29, 2016