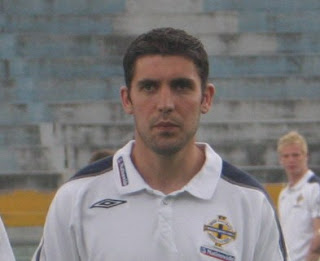 Biography:
An exciting attacking force from either wing, Stephen Carson turned down Manchester United to join Rangers as a teenager. He made an early debut as an extra-time substitute against Aberdeen in a League Cup tie in December 1999. In March 2000 he started on the right-wing for Northern Ireland Under-21s in a 2-1 win in Malta and won his only other cap the following August against Denmark as a second-half substitute.

Carson found his chances at Ibrox limited by a multi-million starting eleven and after just four firstteam outings he joined Dundee United, who's manager Alex Smith had long been chasing his signature, for a fee of over £100,000 in August 2001. Although there were initially more opportunities for Carson to shine at Tannadice he struggled to impress following the appointment of Ian McCall as the club's new manager and he spent a large portion of his time on the substitutes bench.

In the summer of 2003 Carson was told that he had no future with The Arabs and he joined Barnsley on a short-term deal following a successful trial. Although his early performances for The Tykes were impressive, Carson couldn't do enough to earn a permanent deal and in February 2004 he joined Hartlepool. Come the end of the season however, he once again found himself without a club.

In August 2004 Carson joined Marty Quinn's Coleraine, the club he had supported as a boy. Carson quickly re-built his confidence and he proved his worth as an attacking force, capable of taking on and beating opposition full-backs and of scoring from long-range. 2007/08 proves a vintage season for Carson. He finished as The Bannsiders top goalscorer, including a hattrick in a 3-3 draw against Crusaders, and played in a 2-1 Irish Cup Final defeat by Linfield. His form attracted the attentions of other "bigger" clubs, but bids from Portadown and Derry City were rejected.

In November 2008 Carson was touted as a potential Northern Ireland international. Coleraine teammate Davy O'Hare stated: "Stephen definitely has the ability to perform at that level. And if you are talking about Irish League players representing Northern Ireland then Stephen Carson should be involved... In my opinion he is the best player in our league." Come the end of the season O'Hare's opinion was validated as Carson started in Northern Ireland's friendly against Italy.

In July 2009 Carson travelled to Australia for a trial with Newcastle United Jets, however they were unwilling to meet Coleraine's valuation. He signed a pre-contract with Glentoran for the 2011/12 season in April 2011. After two seasons at the Oval, in which he claimed an Irish Cup winner's medal, Carson left by "mutual consent" in the summer of 2013 as the club struggled financially.

Carson re-joined Coleraine but only remained at the Showgrounds until January when he agreed to take up a coaching role with Everton America in Connecticut. He made his last appearance for the Bannsiders as a late substitute in a 2-2 Irish Cup fifth round draw with Cliftonville on 11 January 2014.