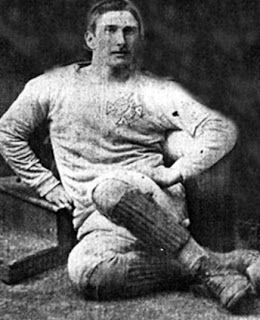 Biography:
Joe Sherrard and brother, Jack, appeared together for Limavady in consecutive Irish Cup Final defeats by Distillery in 1885 and 1886. In the latter of those matches Limavady also fielded two other sets of brothers, John & Tom Fleming and Matt & Bob Douglas. Two other brothers, Connolly and Willie also played for Limavady.

Capped three times by Ireland, on his second appearance, against Wales in 1887, Sherrard scored the final goal in a 4-1 win. Later another brother, William, also collected three caps and in 1895, when he scored against Scotland, the Sherrards became Ireland's first goalscoring brothers.

Sherrard was also part of the Limavady team which toured England in 1886, and famously defeated Everton 1-0, an appearance which meant they had played at Anfield before Liverpool did! He was the scorer of that goal.

In all Sherrard scored 27 senior goals for Limavady, including four in North West Cup Finals, 18 in the Irish Cup and one in the Belfast Charity Cup. He managed one hattrick, in a 5-0 Irish Cup win against Rosemount in November 1885. He also appeared in the English FA Cup for Linfield, as a stand-in for the injured Sam Torrans, scoring in a 3-1 win over Nottingham Forest at Ballynafeigh on the 9th February 1889.

With his footballing days behind him, Joe Sherrard became a well-known auctioneer in Catherine Street by the late 1890s.