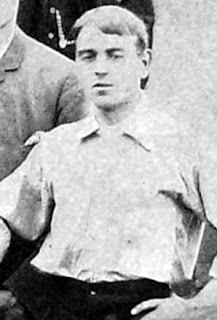 Biography:
Born in Scotland, but raised in south Belfast, Bob Morrison was part of a large footballing family. His brothers Tom “Ching” and Alex both played for Glentoran, but it was with Linfield that Bob made his name. He was regular left-back in the Blues side that claimed the first ever Irish League title in 1890/91. That same season he also played in an Irish Cup Final win over Ulster.

Morrison’s performances in Linfield’s “Double” winning campaign brought him international recognition, and he played in that season’s Home Nations ties against Wales and England. While his brothers went on to further footballing success, particularly Tom who won seven caps from 1895 to 1902, Bob was struck down by pneumonia in the summer that followed his most successful season. He died, aged just 21, on the 12 July 1891.