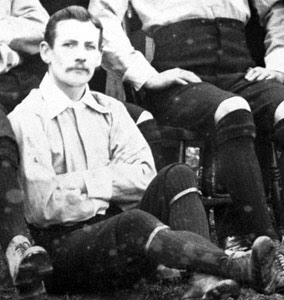 Biography:
One of the quintet of Torrans brothers – Ra, Sa, Ta and Ja – to feature for Linfield during the latter 1800s, Rab was a highly versatile player. Alongside Sam, Rab was among the Linfield side that took to the field for their first ever match, a 6-5 friendly win over Distillery on 11th September 1886 - he marked the occasion with two goals. During his career he featured in all positions along the left side of the field, claiming three Irish League titles and three Irish Cups.

Although Rab had to play second-fiddle to brother Sam, three years his junior, for much of his playing career the pair did find themselves performing together on the highest stage on a few occasions. Rab won his only cap, on the day Sam one his tenth, in a 6-1 defeat by Scotland in March 1893. A month later the pair took the field for the Irish League’s first representative match, and for once Rab made the bigger mark, scoring the final goal in a 3-0 victory over the Scottish League.

Torrans also fulfilled the role of Linfield club secretary and was later trainer of the sides that won the Irish Cup in 1898 and 1899 – taking his personal involvement in Irish Cup successes to five. “Determined and circumspect” as a trainer, he was also appointed as Ireland’s coach for their Home Nations clash against Wales on 24 February 1900 – the Welsh were 2-0 victors. Over the next few decades he fulfilled the role of international team trainer on at least five occasions.