Biography:
Born at Walker's Place, Londonderry to Edward and Bridget (nee Doherty), Barney Donaghey started his playing career with Derry Celtic as an 18 year-old. Not a prolific goalscorer, he managed about 50 goals in a career that took him from Derry to Belfast and on to Edinburgh, Lancashire and back to Derry again.

Donaghey opened his goalscoring account for Derry Celtic with 2 goals in the 3-3 draw with Cliftonville in the Irish League in September 1900. In his short spell with Ulster he scored a goal in a Charity Cup match in April 1902 while on his debut for Belfast Celtic on 30/08/1902 he scored a goal in the 4-2 defeat of Linfield and followed up with another goal in the 2-0 defeat of his previous club Derry Celtic on the 4th October 1902.

Undoubtedly the most famous player at Derry Celtic he played twice for the Irish League team while in their colours. His one full International appearance possibly brought him under notice from Hibernian in Scotland as three of their players were in the Scottish team. After playing for the Irish League against the Football League at Manchester on the 14th October 1905 he was signed by the United club to the end of the season.

During the Great War Donaghey served in the 1st Battalion of the Royal Inniskilling Fusiliers. He was killed on the first day of the Battle of the Somme on 1st July 1916, leaving behind his wife of two years, Sarah (nee Maguire). He is buried at Mill Road Cemetery, Thiepval.

*As this match was held outside the International Championship it is often overlooked in the record books. It is however recognized as an official international by FIFA. 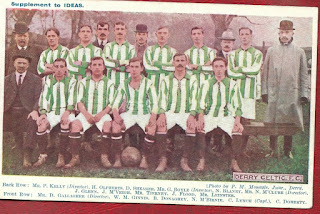