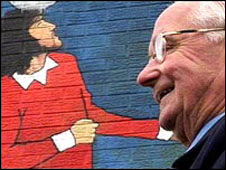 NIFG would like to pass its condolences to the Best family following the death of Dickie Best, father of George.

Dickie remained a man of great dignity over the last forty-plus years in the face of much intrusion into his own life by the celebrity and infamy surrounding his son's life and sad early death. He remained true to his East-Belfast roots, proud of all that George achieved and supportive in times of trouble. Despite his small stature he will forever remain a huge figure in the history of football in Northern Ireland.
Rest In Peace Dickie.