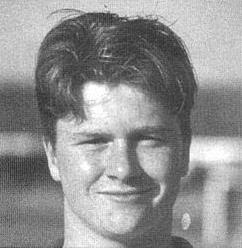 Biography:
A terrier-like midfielder, Darren Finlay was on the books of Glentoran before moving to England as a trainee with QPR. Sadly he never joined fellow-Ulstermen Alan McDonald and Mark Graham in firstteam action and was allowed to leave after two years at Loftus Road. From there he moved to Third Division Doncaster Rovers. He walked straight into the Donnie firstteam, making his debut on the opening day of the 1994/95 season in a 1-0 win over Hereford. It proved a personally memorable day for Finlay as he was sent-off! He played out the remainder of the campaign as a bit-part player at Belle Vue. A rare highlight in a frustrating season was his goal in a 3-0 win over Lincoln. He did play on the left of midfield for Northern Ireland 'B' against Scotland in February 1995 in preference to former QPR colleague Graham and a young Gerard McMahon of Spurs.

Released once again, Finlay returned to Glentoran in the summer of 1995. He had an up-and-down five seasons at the Oval. He was initially successful, often playing with great effect at left-back, as the Glens claimed the 1996 Irish Cup with a 1-0 Final win over Glenavon. Later however he was to suffer from disciplinary problems and he consequently dropped out of the reckoning under new boss, Roy Coyle, and was transfer-listed in 1997. He did appear spordically and put in some effective performances both in midfield and defence and, considering his lack of height, proved quite effective with his head at both ends of the field. In May 1998, after a loan spell at Distillery, he returned to the Glens team for another Irish Cup Final win over Glenavon.

Finlay left the Oval behind to join Distillery permanently in December 1999. He injected some much needed fight into a team facing relegation, scoring in wins over Glenavon and Cliftonville, but it was not enough as the Whites dropped out of the top-level of the Irish League after a single-season return. Finlay then moved to England, before returning to the Irish League for a month long spell at Glenavon.