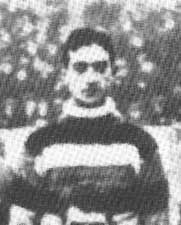 Biography:
A rather eccentric tea-merchant by day, Fred McKee was famed for his Saville Row suit and the cigarette holder that invariably projected from the side of his mouth. He also took these flamboyant characteristics onto the football field, where he earned the nickname “Lizzie”, his tall, pencil-thin frame clad in long black stockings and topped with a red-white-and-blue hooped jersey!

Throughout his long career, McKee remained an amateur, an ethos he no doubt took from his successful days as Cliftonville’s custodian. While at Solitude he won the Irish Cup and Irish League twice each and also claimed his first two Ireland caps, following in the footsteps of his elder brother, Hymie who had won three caps a decade earlier. In his time at Solitude McKee was also honoured at amateur and inter-league representative levels.

Largely due to the presence of one Billy Scott, McKee suffered an absence from the Ireland eleven of almost eight years before he was recalled for the 1914 Home Nation Championships. In the intervening years he had signed for Belfast Celtic and remained a regular choice for Ireland Amateur.
.. 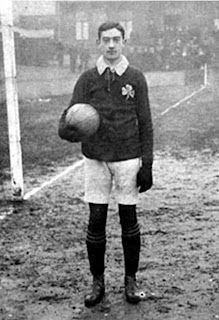 McKee’s re-emergence at senior international level proved a great success as he conceded just once against Wales, England and in a little-under a half against Scotland. It was in that match against Scotland that his glorious return so nearly turned sour as he was injured late in the first-half and forced to retire. In his absence it was stand-in goalie McConnell’s naivety that lost Ireland the goal that could have cost the Home Nations title. Thankfully the ten-men rallied to score an equaliser and so claim their first outright Championship.

McKee transferred to Linfield during the 1914 close-season and went on to claim three Irish Cups during the years of the Great War. Although he was never called on for another full international appearance he did win further amateur recognition after hostilities had ended.

McKee’s Linfield career began to wane during their great 1921/22 seven-trophy campaign during which, having started as first choice, he lost his place to Alfie Harland. Consequently McKee claimed just one winner’s medal that season, in a 1-0 victory over Cliftonville in the Alhambra Cup. One of McKee’s final appearances for the Blues was in their 4-1 1923 Co. Antrim Shield Final win against Glentoran.

Unknown said…
He also played 1 league game for Bradford City in 1912 i believe.

Anyone have any information on his short stay in Bradford?