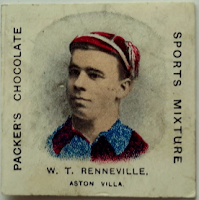 Biography:
“Pepper” Renneville played only schoolboy football before leaving Ireland for London. He then played College football and eventually joined Southern League side Leyton. It was while with the London-club that Renneville won his first three caps, all at outside-right, as Ireland made a rare challenge in the 1910 Home Nations Championship. A draw with England and a win over Scotland left the Irish needing to beat Wales to claim the title, even a draw would see the trophy shared. Wales won 4-1 and Ireland slumped to third.

Finally, in May 1910, Renneville made it into the Football League with Aston Villa. He played just twice for Villa as a battling centre-forward, who, despite his diminutive stature, made an impact on the toughest of opposition defenders. While at Villa he did win a fourth and final cap, against Wales at Windsor Park in January 1911, though it proved a sad end to his international as he left the field injured after 55 minutes, with the Welsh defeating the ten-man Irish 2-1. Renneville's Villa career was ended due to an injury collected in a reserve team game and his retirement was announced in April 1912.

That was not the end however, as Renneville returned with non-League Worcester. Despite further injuries he played in Walsall's first post-Great War season. He was one of ten players tried at outside-right, and although his accurate corner-kicking was commended, his general play was slow. Through October and November 1919 he played in a total of four Birmingham & District League and Staffordshire Cup matches for the club, scoring once.

With thanks to Jim Murphy, Cris Freddi and Martin O'Connor for their inputs.