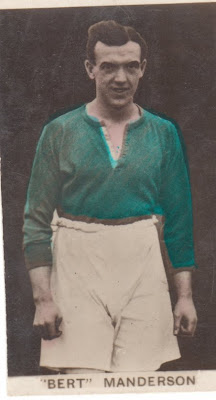 
Biography:
Bertie Manderson was a full-back possessing pace and positional sense forming an effective club partnership with another Ulsterman, Billy McCandless at Rangers. Manderson is still rated as one of Ibrox Park’s most loyal servants. They said that Rangers blood flowed through his veins.

After beginning his career with Cliftonville his Irish League debut came for Belfast Celtic in 1912. It was while playing for Glenavon that he was spotted by Rangers manager William Wilton. Signed, along with team mate Jim Clarke, on an initial months loan, Manderson remained but Clarke returned home to join the army during the First World War before he resumed his playing career at Mourneview Park. 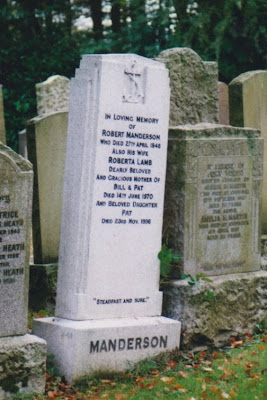 Manderson, who was known to the fans as “Daddy Long Legs”, held the record for appearances for Rangers, 452 between 1915 and 1927. In his time at Ibrox he played in seven championship winning sides, but a Scottish Cup medal eluded him as Rangers endured a 25 year hoodoo in that competition.

Manderson then moved on to Bradford Park Avenue, just a few months after playing for Scotland in Jock Ewart's benefit match against Bradford City. He moved back to Glasgow as trainer of Scotland’s oldest club, Queen’s Park from the late-1920s through to the '40s. He was trainer for the Great Britain team at the 1936 Olympics.

Born in Jaffa Street off the Crumlin Road, Bertie Manderson had a life-long association with the Boys’ Brigade. He died in Glasgow at the age of just 52. Inscribed on his gravestone at Eastwood Cemetery are the words “STEADFAST AND SURE” – a slight corruption of the motto of the Boys’ Brigade.

Pictures supplied by Red Warrior from the ILS Forum.