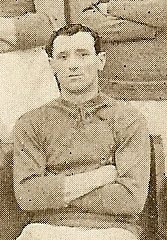 Biography:
Joe Toner had been a star of Gaelic games from an early age. He represented Down at hurling and played Gaelic football for Castlewellan GAC. He emerged as a talented soccer player in Irish War-Time football with Belfast United. The club had played at the top level for the duration of hostilities but were to return to junior circles with the resumption of the Irish League-proper for the 1919/20 season. This made their players ripe pickings and cash-strapped Arsenal stepped in to take Toner to Highbury.

Arsenal had been promoted to an enlarged First Division under dubious circumstances, after finishing fifth in the Second Division at the end of the last pre-War season. Still, faced with a battle to maintain the position they found themselves in, new manager Leslie Knighton set about building a top-flight side on a shoe-string budget. Toner made his debut for the Gunners at Everton in October 1919. He put in an astounding performance for a novice, the Londoners defeating the Merseysiders 3-2. From there he retained his place in the first-eleven for a ten game sequence but soon found himself sidelined.


Toner shared his duties on Arsenal’s left-wing with the likes of Jimmy Paterson and Samson Haden over the following few seasons. In 1921/22 he managed thirty League and FA Cup appearances and was rewarded with his first cap for Ireland in a 1-1 draw with Wales. The following season he played just seven times for Arsenal, but was again capped against Wales. 1923/24 brought only three League appearances but two Ireland caps, including in a famous 2-1 win over England.

It was 1924/25 before Toner again managed a good run in First Division football, playing 26 times as Arsenal flirted with relegation. Herbert Chapman was appointed Arsenal manager during the summer of 1925 and he set about building the side that would come to dominate English football. Toner played in Chapman’s first two matches in charge, but was dropped and sold to St Johnstone mid-season. He became the first Saints player to win international recognition when capped against England in October 1926.

A broken leg ended Toner’s playing career. In the late-1920s he was on the coaching staff at Coleraine. He played once for the Bannsiders, deputising during an injury crisis. With his footballing days behind him, Toner settled back in Castlewellan, where he died in 1954.