Biography:
A goalkeeper who honed his skills on the Gaelic field, Jack Hehir was Bohemians goalkeeper as they won the first all-Dublin Irish Cup Final win over Shelbourne. He saved two penalties, from Dick Merrigan and Billy Lacey, in an initial 1-1 draw before the replay was won 3-1.

He played in two further Irish Cup Finals, in a 1909 defeat by Cliftonville and in 1911 when Shelbourne enacted their revenge.

Hehir twice represented the Irish League – in 5-0 and 8-1 defeats by the Football League in 1908 and 1909. He won his only Ireland cap against Wales at the Racecours, Wrexham in 1910. The Welsh were convincing 4-1 winners, holding a 3-0 lead at half-time.

In 1915 he left Bohs to move to London "to take up an important appointment at the War Office." 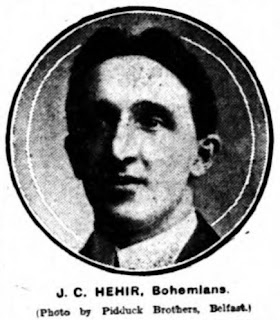