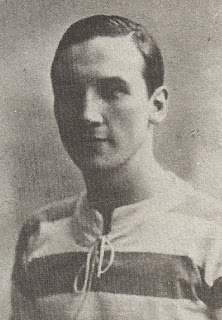 
Biography:
Jackie McGrillen followed in the footsteps of his father, formerly of Distillery and Glentoran, as an Irish League footballer.

McGrillen Jnr took to the game with his school team at St Malachy's before playing with Bangor Amateurs as a teenager. It was with Rosario of the Falls League, at the time affiliated to the FA of the Irish Free State, that he impressed with his "ready command of the ball, and general conception of the best thing to do, and the right moment to do it." Due to his club's tie-up with the rival association, McGrillen was denied the opportunity to claim Junior caps but, in August 1921 he did represent the Falls League against Bohemians at outside-left, though at the time he more regularly featured in the centre.

Short, but sturdy with a good turn of speed, McGrillen was actually signed to Bohemians, but never made an appearance prior to signing amateur forms with Linfield late in the 1921/22 season. He played just twice, at outside and inside-left as Linfield wrapped-up their seven-trophy season before establishing himself the following term as Linfield made do with a “treble” of Irish League, Irish Cup and Co. Antrim Shield. The flying winger also won two amateur caps against England in 1923 and 1924.

Transferred to Clyde in the 1923/24 season, McGrillen didn't have long to wait or far to travel for his full international debut. The big day arrived at Parkhead when he appeared as outside-right in a 2-0 defeat by Scotland. The Irish side put in a spirited display only to be undone by two goals in the last five minutes.

Clyde suffered relegation from the Scottish First Division in McGrillen’s first campaign and he was soon back in Belfast with Belfast Celtic. At Paradise he was a key player in a number of trophy successes, normally as an outside-left. He won inter-league honours and a second international cap, in another 2-0 defeat by Scotland. This time the game was a dull affair, dominated by both sides’ backs, though McGrillen was noted for his “good centres”.