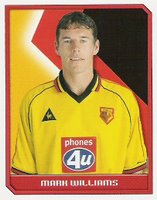 Biography:
A player perhaps more remembered for his glamorous girlfriends, Mark Williams was a defender who had most of the qualities of a top-class centre-back, with the exception of pace.

A graduate of the famed Crewe Alexandra youth set-up, Williams was one that got away for Dario Gradi and he dropped into non-league football with Newtown. His consistent performances in the Northern Premier League earned the attentions of several League clubs, but it was Newtown's near-neighbours Shrewsbury that gave Williams a second chance. On 28th March 1992, within days of his move to Gay Meadow he made his debut in a 4-2 defeat at Hartlepool as Shrewsbury slid towards relegation to the "new" Third Division. "Bomber", as he became known, established himself in the first eleven the following season as the play-offs were narrowly missed. In 1993/94 he was part of what was regarded as the Divisions finest back-lines as promotion was achieved as champions. He continued his consistent displays in Division Two, earning plaudits for his simple effectiveness and heading ability.

In the summer of 1995 Williams joined Chesterfield in a tribunal set £47,000 deal. He continued to perform in his own un-ostentatious way in a team that relied heavily on a strong defence. His own confidence began to build and by 1996/97 he had become regarded as among the best central defenders in Division Two, combining a coolness on the ball with the courage to get stuck-in as required. Also a goal-threat in his own right, not just with his head as might be expected, but also from his thumping free-kicks, he scored the winner in the First Round of Chesterfield's historic run to the 1997 FA Cup semi-final - it was a run that should have continued to Wembley but for an incorrectly ruled-out goal against Middlesbrough. Williams' continued good form earned him the Chesterfield Supporters' Club Player of the Year title in 1997/98 and in 1999 he made history when he became the first Spierites player to gain full international recognition.

Northern Ireland boss Lawrie McMenemy took a real shine to Williams and was excited to discover the player's Northern Ireland ancestry - his mother was from Belfast. He made his Northern Ireland debut in a snowy 'B' international against Wales at Wrexham and impressed enough to earn rapid elevation to the senior set-up. His first outing in a full international was in Germany's Euro 2000 qualification visit to Belfast in March 1999 and he almost scored early on, having his header cleared of the line. Although Northern Ireland were otherwise given the run-around by the Germans, Williams acquitted himself well and he was to retain his place on the international scene for the next six years.

Williams was on the move in the summer of 1999, leaving Chesterfield for a Watford side who had just been promoted to the Premiership on a Bosman-style free transfer. Hornets boss Graham Taylor saw the newly capped defender as a man who could handle life on the biggest stage. They got off to a good start too, recording 1-0 wins over Liverpool and Chelsea (Williams barely giving the £20 million forward pairing of Jostein Flo and Chris Sutton a kick!) and he weighed in with a screamer of a goal against Leeds. Perhaps inevitably, Watford began to struggle and Williams appeared to lose his previously unshakable confidence after being controversially red-carded in a 4-1 defeat by Manchester United at Old Trafford in October. Thereafter, he struggled for form and a firstteam place as Watford slipped towards relegation.

On the international stage Williams continued to prove a more than useful presence in an otherwise poor Northern Ireland side. Particularly impressive were performances in a 1-0 win over the Republic of Ireland in Dublin and an unlucky 1-0 defeat by World Champions France at Windsor Park. He retained his place in the team as new manager Sammy McIlroy sidelined his previous defensive partners Steve Morrow and Barry Hunter in favour of the younger Colin Murdock. It was only the reinstatement to the squad of Gerry Taggart, who had been ostracised under McMenemy, that saw Williams drop to the bench for several games.

In July 2000 Williams left Vicarage Road for Wimbledon, another club freshly relegated from the Premier League and his form quickly returned at the lower level. He was the model of consistency in central defence and proved a regular goal-getter, including claiming a brace against QPR, and he was rewarded by being voted the Dons' Player of the Year in 2001. For Williams the 2001/02 was largely curtailed by a broken leg collected in the opening game of the season, although he actually played on for two more games and scored against Brighton before the injury was diagnosed! Although he was fully fit and back in the team showing all the qualities of old for the following campaign, it became clear that the cash-strapped Wimbledon would not be offering a player of his vintage a new deal. He was allowed an early release from the remainder of his Dons contract to join Stoke City who were in desperate straits towards the foot of the First Division. At Stoke he was largely used as part of a three-man central defence in away games, a successful enough tactic that brought wins at Watford and Coventry and a draw with Wolves as the drop was avoided by a four point margin.

Unable to secure a longer term deal with Stoke, Williams made the bold move to the MLS with Columbus Crew. It was a move he hoped would lead to a coaching role when his playing days were over but he lasted less than half a season as the pace of "soccer" in the USA left him looking laboured and clumsy. He played just five times for the Crew, and was booked in every match in which he played. At the close of MLS season he returned to England to re-join Wimbledon, by then playing in Milton Keynes. He quickly re-established himself, offering valuable experience to a young side, who in return offered the legs to cover for Williams' lack of pace. Appointed captain of the renamed MK Dons for the 2004/05 season, he struggled with a series of niggling injuries throughout the campaign and in March was loaned out to Rushden & Diamonds who, under player-manager Barry Hunter, were battling for their Football League lives.

Williams scored his only goal for Northern Ireland when he headed home a Michael Hughes corner to level the scores at 1-1 early in an exciting 4-3 defeat by Bulgaria in March 2001. In August 2002 Williams was handed the Northern Ireland captaincy at short-notice for a match against Cyprus. It was a turbulent day as the expected captain, Neil Lennon, had earlier withdrawn from the squad having received a death threat, allegedly from loyalist paramilitaries. In a match played in an otherwise subdued atmosphere, Williams was lucky not to be punished for pushing an opponents head into the turf during an altercation as the game was played out to the inevitable 0-0 draw.

With Gerry Taggart bringing his international career to a premature close, Williams remained the regular partner for Aaron Hughes in the centre of Northern Ireland's defence until his place gradually came under pressure from younger men in the shape of Colin Murdock, Danny Griffin and Stephen Craigan. He increasingly struggled to keep up with the pace of international football and his discipline slipped as he collected regular yellow cards and reached a low-point when he was sent-off for violent conduct against Barbados in 2004. On the flip side, he maintained a cool head throughout a 2-2 draw with Wales as an inexperienced nine man Northern Ireland held out at the Millennium Stadium. His final outing in green was in a sublime, but ultimately fruitless, defensive performance against Poland in Warsaw in March 2005 as Northern Ireland lost 1-0 thanks to a late goal.

On his release by MK Dons in 2005 Williams was linked with a move to play football in Spain though a move never materialised. In 2006 he was said to be considering signing a short-term deal to play for Portadown in a UEFA Cup match against FBK Kaunas though again this came to nothing. He has been involved in a company that organises golfing breaks in Spain and is now married to model and actress, Linsey Dawn McKenzie with whom he has a son.

In 2016 Williams announced that he had been one of many young players sexually assaulted by Barry Bennell while a youngster at Crewe.