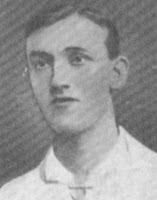 Club Career: * All competitions.
# Division One appearances only, also played in Division Two.

Biography:
One of Glentoran’s all-time great players, Johnny Scraggs won a clutch of medals and played over three hundred games in two spells with the club. He also represented the Irish League on seven occasions and won two caps for Ireland.

Scraggs’ Glens career got off to a slow start as in his first four seasons he played just fourteen first eleven games. When he did finally establish himself in the 1913/14 season honours were quick to follow. In November 1913 he played his first game for the Irish League – a 2-1 defeat by the Scottish League at Windsor Park. In March 1914 he was a member of the first Glentoran side to lift the Irish Cup as Linfield were defeated in the Final. In early-May Linfield were again defeated, as the City Cup was won in a deciding Test Match. After a hectic domestic season Scraggs was a member of the Glentoran squad that embarked on a tour to central Europe which would yield the Vienna Cup – the first European trophy won by a British side!

Scraggs remained a mainstay of a famous Glentoran half-back line that also included William Emerson and George Ferritt throughout the years of the Great War. The Glens dominated the City Cup (referred to as the Belfast Cup throughout the period of “emergency” football), winning it five times in six seasons. Their best War-Time season was 1916/17 when only defeats by Linfield in the Finals of the Co. Antrim Shield and Charity Cup prevented a clean-sweep – though undoubted consolation could be taken from wins in the Belfast & District League, Irish Cup, Belfast Cup and Gold Cup.

In 1919 Scraggs missed out on a third Irish Cup success, despite his goal in the second replay of the Final, as Linfield ran out 2-1 winners. In 1921, the year in which he finally claimed a “proper” League winner’s medal, Scraggs was selected by Ireland for the first time, and appointed captain, for a match against Wales in Swansea. He also won further honours that season in the shape of the Irish Cup and Co. Antrim Shield. Scraggs held on to his place in the Ireland side for a match against England in October 1921 amd put in a sterling performance as a 1-1 draw was achieved at Windsor Park. Four days later Scraggs made his final inter-league appearance in a 3-0 defeat by the Scottish League at Clyde. In all his seven appearances for the Irish League he never finished on the winning side.

On his return to Glentoran from representative duty Scraggs was transferred to Clydebank. It was a season of huge upheaval at the Oval as many stars made the move across the water (Davy Lyner, Willie Crooks and Billy Emerson all left in that same campaign). Clydebank were a Scottish First Division side when Scraggs joined them, but his first season at Clydeholm Park brought relegation. The next four campaigns brought promotion – relegation – promotion – relegation before the club was hit by the economic difficulties of the age and began a terminal decline that eventually saw them resign from the League in 1931 and go out of business the following year.

In the meantime Scraggs had returned to Glentoran in 1927. He played out his final season as club captain, but the cash-strapped Glens were a shadow of their former selves and failed to make an impact on any competition.